A statement from the state police headquarters said, vehicles will be released in a phased manner to avoid crowding.

CHENNAI: The Director General of Police JK Tripathy on Thursday ordered release of vehicles seized for violating lockdown norms, since March 24. A statement from the state police headquarters said, vehicles will be released in a phased manner to avoid crowding. 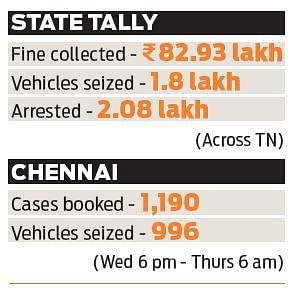 However, the city police is yet to take a decision in this regard. A senior officer in the traffic wing said, they will discuss and decide on the issue because it is feared that this release will lead to more violations.

The statement said that the local police will inform vehicle owners about the date they can collect their vehicle on. “Starting Friday, every day from 7 am to 12.30 pm vehicles will be returned. People should carry a copy of the FIR, license and the vehicle’s RC book. They should also maintain social distancing at the police station,” the statement said. It was space constraint in police stations that forced the release of these vehicles, said an official, adding that people may also need it for emergencies.