Thiruvayi Amma has been working at the crematorium since the time she got married, at the age of 13.

TIRUCHY: Rules are plenty for women in a patriarchal society, even in 21st century. One of the rules denies them entry into a cremation ground. But here are a few women who are breaking those stereotypes and doing jobs that most men are reluctant to perform.

From the moment a dead body arrives at the Oyyammari crematorium to the time ashes are collected, it’s Thiruvayi amma (70) and her family that takes care of the affairs there.

Thiruvayi has been working at the crematorium since the time she got married, at the age of 13. “My day begins at 6 am and ends at 6 pm,” says Thiruvayi. “I arrange the pyre, make sure the bodies are fully burnt, ashes are collected, and then clean up the place later. This is the only trade our family has known, for generations.”

Thiruvayi says it takes about 45 minutes for a pyre to be arranged. “It is intricate work to ensure there is sufficient heat for a body to be burnt properly. Some days are busy, some days there’s no work. You cannot predict it. My husband worked here, now my daughter works here too,” says Thiruvayi.

“We get anything between Rs 2,000 and Rs 3,500 per cremation. After deducting all the costs incurred, the leftover money is shared among 12 of us who work here. In the end, we hardly get anything. I have faced several challenges in my six-decade-long career,” says the septuagenarian. 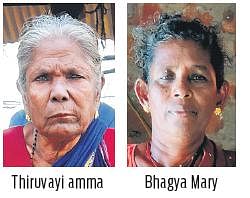 “In cases of murders or crimes, people who accompany the body are angry and try to take it out on us. I have learnt how to handle such people. After all, what other trade am I going to learn at the age of 70,” she says.

‘What is so wrong with our profession?’

Not just attack, there is also a high risk of infection, says Dhanam, Thiruvayi’s daughter. “We work with dead bodies that are dirty and infected. Sometimes, the bodies have worms. I clearly remember how worms severely affected my father once. Mosquitoes are here in large numbers. We can’t even eat properly,” she rues. Thiruvayi has other worries in her mind, one being the stigma attached to marrying into such a family.

“My grandson is working in Singapore. Yet, no one wants to give their daughter in marriage to him because of our job. What is wrong in our work?” she asks. Despite all the odds, Thiruvayi still sports a smile on her face. When asked to pose for a picture, her face lights up and she quickly sets her hair right, adjusts her saree and poses.

Thiruvayi is not the only woman in this profession. Bhagya Mary (50) started working at Ponmalaipatti burial ground after she got married. They used to tend to all work together till her husband died. After his death, Mary’s son helped her out till he was hit by a sickle on the head leaving his right side paralysed.

All she earns is being spent on his treatment. Yet, she smiles and says she believes in God. “I have to hire people. But, the problem is that it hardly leaves us with any money. I get around Rs 3,500 to Rs 5,000 per funeral, of which half goes for our expenses,” she says.

She lives in an unfinished brick house with no doors. However, the pain never shows on her face. “When I started this job, my heart used to beat fast, hands used to shiver as I set the pyre and used to feel weird. Now I am used to all this. I believe in God and I have no fear,” she adds.

Stay up to date on all the latest Tamil Nadu news with The New Indian Express App. Download now
(Get the news that matters from New Indian Express on WhatsApp. Click this link and hit 'Click to Subscribe'. Follow the instructions after that.)
TAGS
Thiruvayi Amma Bhagya Mary