25-year-old Kumaresan was allegedly tortured by the police on May 10 and died in TvMCH on June 27.

TENKASI: Autorickshaw driver Kumaresan, who died due to the alleged custodial torture at the hands of the Veerakeralampudur police, had multiple assault injuries when he was admitted to the Tirunelveli Medical College Hospital (TvMCH), a report made by a doctor has revealed.

"Kindly call Intensive Medical Care Unit (IMCU) and give your valuable opinion for this patient, a case of 'assault with multiple injuries'/Multi-organ Dysfunction Syndrome (MODS)/Acute Kidney Disease (AKD)/ACF and respiratory failure," reads the investigation report that a doctor wrote to his counterpart in the Nephrology Department of the hospital, which The New Indian Express has now accessed.

25-year-old Kumaresan was admitted to the IMCU on June 12 according to the report.

"The doctor's comment clearly says that Kumaresan has been assaulted by someone. The postmortem report may reveal more details," said sources in the health department wishing anonymity. 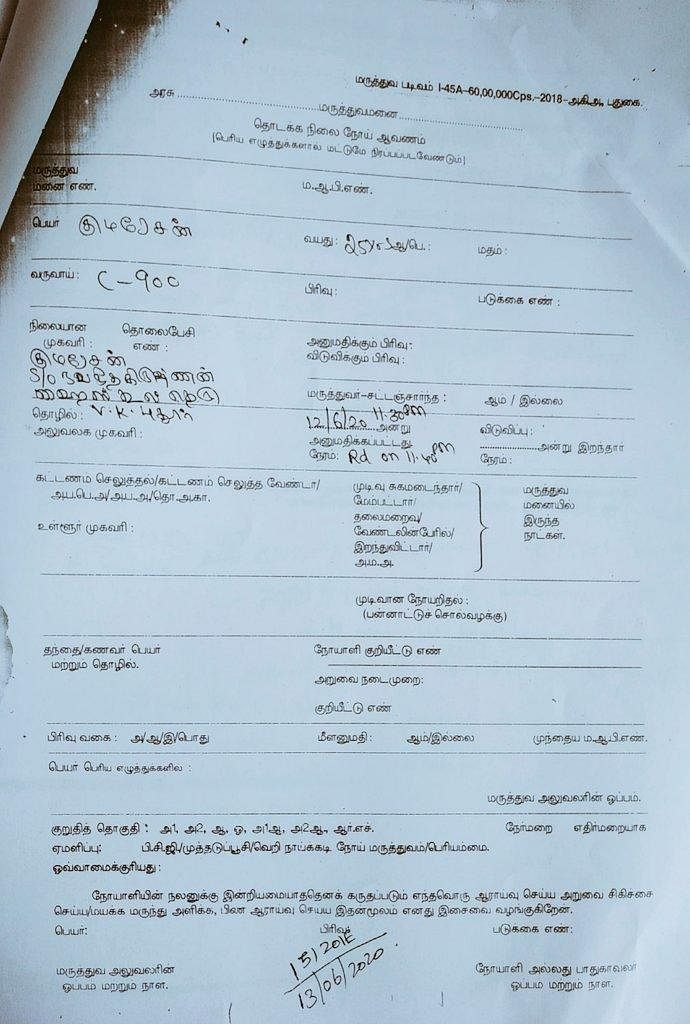 Stating that the victim's family is preparing to file a petition before the Madurai Bench of Madras High Court demanding a CBI inquiry into the case, CPM district secretary KG Baskaran alleged the police had inflicted internal injuries during the custodial torture.

This led to Kumaresan's death after he had battled for life for more than six weeks.

Kumaresan was allegedly tortured by the police on May 10 and died in TvMCH on June 27.

"We noticed many changes in him after he returned home on May 10. He couldn't eat properly and did not talk to us much," said Navaneethakrishnan, father of Kumaresan.

He added that his son had started vomiting blood in the beginning of June and rued, "since he was threatened by the police that we would be lodged in jail under the Goondas Act, he did not tell us anything about the custodial torture. He spoke about it only with the doctors of TvMCH who recorded it in the report."

"Police might be trying to escape in this case by questioning the interval between the custodial torture and death of Kumaresan. But the truth is that the police had damaged Kumaresan's internal organs like his kidneys and lungs in such a way that no outside injuries were visible.

Also, before he was admitted to the TvMCH for 16 days, he took treatment in three other hospitals in Tenkasi district. He hid the fact from his family members only because he was threatened with the Goondas Act," Baskaran added.

When contacted by The New Indian Express, Suguna Singh, Superintendent of Police, Tenkasi said the inquiry officer will investigate the case from all angles.

"It would not suitable for me to comment on this issue as there is already an inquiry going on. The two cops who were accused of custodial torture have been transferred to the Armed Reserve, Palayamkottai," he said.