Official sources said that the ticket information were pinned on to the clothes of the workers and they were instructed not to take them off until they disembark the train.

TIRUNELVELI: Thirty-one government buses and a van, on Tuesday evening, ferried into Tirunelveli Junction Railway Station as many as 1,025 migrant workers from the Kudankulam Nuclear Power Project (KKNPP) premises and 11 more from Tirunelveli Corporation. Besides, 296 migrant workers from Thoothukudi district arrived at the railway station in 11 buses. At the time of writing this story, the workers were all set to board that night, a special train, arranged by the Central government, taking them back to their homes in Bihar. Sources said that the State government made arrangements for the tickets, food and other resources required for the workers' journey back home.

Official sources said that the ticket information were pinned on to the clothes of the workers and they were instructed not to take them off until they disembark the train. The body temperature of the workers were recorded and a medical examination was conducted on the KKNPP plant premises itself, added sources. During the evening, the train was disinfected, and Assistant Commissioner Iyyappan, along with Health Officer Arasakumar, inspected the precautionary works carried out at the railway station. Line marks were painted on the railway station premises, in order for the workers to maintain social distancing while boarding the train. 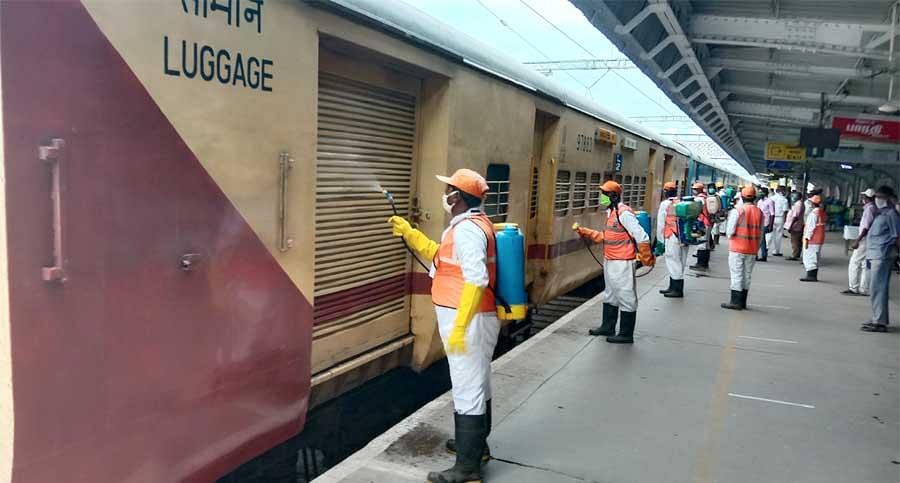 Train to Jharkhand on Wednesday

The railway officials said that another special train on Wednesday would leave for Jharkhand, transporting over 1,000 more workers from the KKNPP.

Chief Minister Edappadi K Palaniswami on Tuesday announced a relief of Rs 2 lakh and Rs 1 lakh respectively to a police personnel and Kudankulam inspector, who both were injured during an agitation, staged by migrant workers on Kudankulam Nuclear Power Project (KKNPP) premises on Saturday. More than 800 workers, demanding to send them back home, had staged a protest, which caused the agitation. The two injured police personnel -- Kudankulam Inspector Anthony Jegatha and one Sakthivel -- were admitted to a government hospital later that day.

More from Tamil Nadu.
Now we are on Telegram too. Follow us for updates
TAGS
COVID-19 lockdown migrant workers