All sectors of the industry are in deep stress, and the brackish water aquaculture is not left out.

CHENNAI: All sectors of the industry are in deep stress, and the brackish water aquaculture is not left out. With the export market shrinking, farmers are already downsizing cultivation area to nearly 40 per cent. Shrimp farming is practised in 8,850 hectares in the State, and the yield is 43,650 tonnes. An estimated 60,000 families are dependant on the trade. 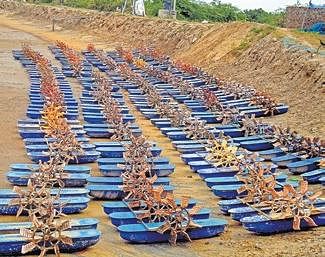 Chennai-based Central Institute of Brackishwater Aquaculture (CIBA) did a survey and found out the loss to the sector due to the lockdown was around Rs 1,100 crore. The survey estimates the reduction in production to be around 10,000 tonnes -- worth Rs 350 crore. CIBA director KK Vijayan told Express that the major stocking season was during March-April, which was disrupted this year.

“About 30% of farmers prepared their ponds but did not stock up due to the difficulty in accessing quality seed. Disease incidence reported during the lockdown period was about 10% of the farming area and they had to drain their ponds. Farmers, who had a standing stock resorted to ‘panic harvesting’ of smaller size shrimp and sold them at lower prices,” he said.

Tamil Nadu has about 65 shrimp hatcheries and 8 Naupliuus producing centres. Hatcheries have reported a reduction in sale of seed of over 40%. “Many of us have drained the seed as it cannot be stored,” said multiple hatcheries owners. Ban on international air cargo to import Specific Pathogen Free brood stock and related disturbances in the functioning of Aquatic Quarantine Facility is likely to affect seed production and supply for the coming months.

“Currently, over 90% of farmers cultivate Vennamei, an American shrimp. We have Indian species like Indicus. It should be promoted,” Vijayan said. The seafood exporters association is hoping the government would resolve the crisis.

EMPLOYMENT LOSS
CIBA survey reports that 60,000 people, who are directly or indirectly engaged in production, processing and distribution systems, could be rendered jobless.