Let us work unitedly for a third consecutive victory: Palaniswami

EPS thanks leaders & cadre for declaring him as the chief ministerial candidate, says anyone can climb to top positions through hard work

CHENNAI: Thanking the party leaders and cadre for declaring him as the Chief Minister candidate for the 2021 Assembly elections, Chief Minister and AIADMK joint coordinator Edappadi K Palaniswami on Wednesday called upon the cadre to work unitedly for ensuring a third consecutive term for the AIADMK in 2021.

“As an affectionate brother, I have been working towards adding to the glory of the AIADMK. This political movement has given the opportunity to lakhs of people from the grassroots level to put their signature in green ink.  There is no place for dynastic politics in AIADMK. Only sincere work will take you to the top position, and I am a example for that,” the Chief Minister said.

Stating that the AIADMK had proved that even a farmer could reach the top position through sincere work, Palaniswami said for that reason, he would remain indebted to the AIADMK till his last breath.
Recalling the contributions of former Chief Minister J Jayalalithaa to the party’s growth, the Chief Minister said the cadre of the party had the duty to realise her dreams regarding the glorious future of the party.

Referring to the achievements of the AIADMK government during the past four years, including those regarding the Cauvery water dispute, declaring delta districts as protected agricultural zone, implementation of the Athikadavu-Avinashi project, linking of Cauvery, Vaigai, and Gundar, etc., Palaniswami said through the Global Investors Meet, over `3 lakh crore investments have been brought to Tamil Nadu. “I humbly say this: The government which is led by a farmer and has to its credit many achievements, is giving you an opportunity to seek vote for the Two Leaves symbol,” Palaniswami added. 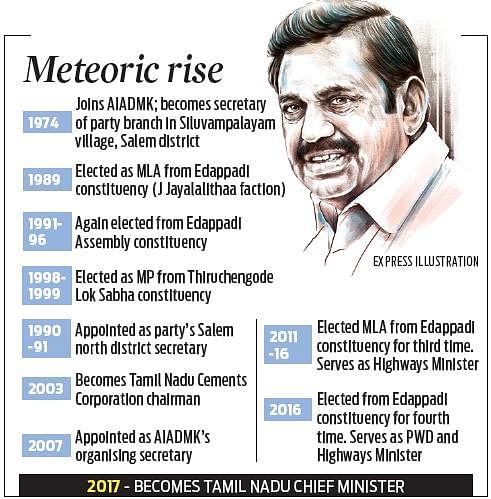 Now we are on Telegram too. Follow us for updates
TAGS
AIADMK Edappadi K Palaniswami TN assembly elections