According to a police source, the deceased, Vijayakumar from Ellaiamman Koil street in Korkadu near Villianur, was a SIM card retailer. 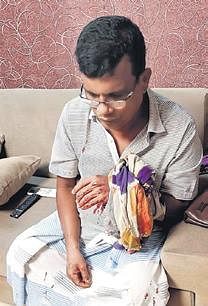 According to a police source, the deceased, Vijayakumar from Ellaiamman Koil street in Korkadu near Villianur, was a SIM card retailer. He was living with his wife Madhumitha and their two children.

The man allegedly started playing online gambling games like rummy during the lockdown period, and at initial stages, was said to have won some money.

However, the habit grew to be an addiction, and Vijayakumar continued gambling by taking loans from friends and relatives. But he lost a huge some of money in gambling. He had been upset as his lenders started to pressurize him to repay the money.

Meanwhile, on Saturday night, he left a voice note to his wife on WhatsApp, in which he said his body would be found near his bike and his cell phone on the tank cover of the bike. On Sunday morning, passersby found his charred body in the lake bund along Puthukuppam road and informed police.

(If you are having suicidal thoughts, or are worried about a friend, or need emotional support, someone is always there to listen. Call AASRA's 24x7 Helpline: +91-9820466726 for assistance)

Now we are on Telegram too. Follow us for updates
TAGS
gambling suicide