CHENNAI: Governor Banwarilal Purohit, Chief Minister Edappadi K Palaniswami and leaders of various political parties on Saturday extended Ayudha Pooja and Vijayadasami greetings to the public. The Governor, in his message, said, “Ayudha Pooja and Vijayadasami mark the triumph of good forces over the evil. May this festival brings peace, harmony, happiness, and good health to our State and Nation,” he added.

Wishing that the festivals bring prosperity to everyone, Palaniswami said, “Three aspects are vital for one to prosper in life – energy, wealth, and education. So, people worship Goddesses Durga, Lakshmi, and Saraswathi during the Navarathri days. During Ayudha Pooja, people worship their professional equipment, and commence good initiatives on Vijayadasami day.” BJP’s L Murugan and AMMK’s TTV Dhinakaran also extended festival greetings. 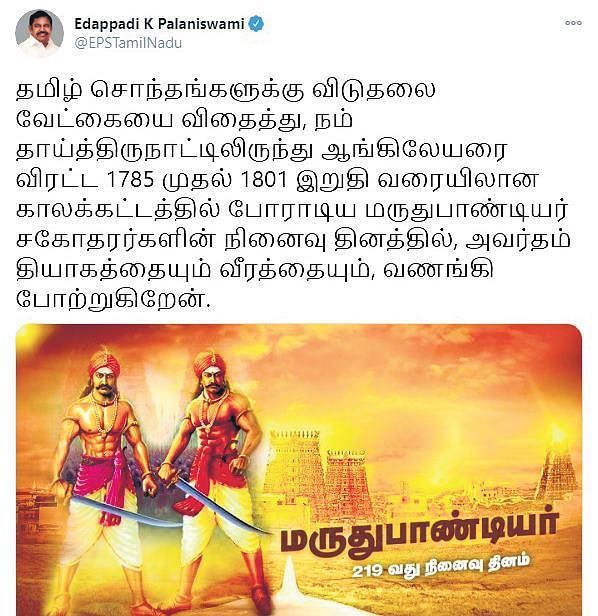 Nominations invited for Republic Day awards
Chennai: The government has invited nominations for Anna Medal and Kabir Puraskar for 2021. Nominations should be sent by December 14, to the Public Secretary, Fort St George, Chennai-600009, or through https://awards.tn.gov.in. The awards would be presented by CM Palaniswami during the 2021 Republic Day celebrations.

Union Minister calls on Palaniswami
Chennai: Union Minister of State for Social Justice and Empowerment, Ramdas Athawale on Saturday called on Chief Minister Edappadi K Palaniswami at his residence here and condoled the demise of latter’s mother, Thavusayi Ammal. She passed away on October 13 at Salem.

CM grants solatium to kin of accident victims
Chennai: Chief Minister Edappadi K Palaniswami on Saturday granted a solatium of `1 lakh each to families of 24 people who lost their lives in different accidents across the State during the recent past. He also conveyed his condolences to the bereaved families.

Now we are on Telegram too. Follow us for updates
TAGS
Governor Banwarilal Purohit Ayudha Pooja Vijayadasami greetings