THIRUVARUR/THANJAVUR:  A couple of years back, a devastating severe cyclonic storm, Gaja, crossed the Tamil Nadu coast between Nagapattinam and Vedaranyam, killing 52 persons and displacing over five lakh people. At the time of its landfall, wind speeds of 100- 120 kmph were experienced and the highest sustained speed of 160 kmph was recorded at Muthupet, home for Tamil Nadu’s largest mangrove forest.

In our new series titled, Lost Treasure, we bring you a walk through from the oncedense mangrove forests of the coastline. Going by the multiple testimonies of jurisdictional forest officials and the local populace, the fatality count of Gaja could have easily run into hundreds if not for Muthupet mangroves that acted as a natural barrier, preventing the killer storm from hitting coastal villages in Tiruvarur and Thanjavur districts.

However, the storm was too strong for even 20 to 30-foottall fully-grown mangroves to endure. The latest remote sensing data from Tamil NaduTamil Nadu forest department, accessed by Express, shows that a whopping 60 per cent of the total 11,886 hectares of Muthupet mangrove area has now degraded. Only 2,000 hectares (16.8 per cent) is currently a dense mangrove forest. The State of Forest Report, 2019, says there was a decline of 4 sq.km forest cover in the State between 2017 and 2019.

“This loss is significant in Ramanathapuram (1.07 sq.km) and Thiruvarur (1.04 sq.km) districts. It is due to the devastating damage caused by the Gaja cyclone,” the report says. Muthupet, or the ‘Land of Pearls’, is part of the Point Calimere Wildlife Sanctuary, which is the only Ramsar Site in Tamil Nadu. 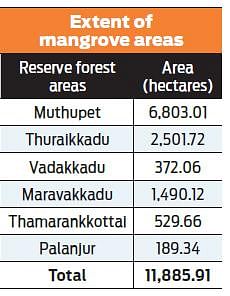 ‘Forest, lagoon will die without intervention’

A Ramsar Site is a wetland site designated to be of international importance. It is also an important protected area as it is closer to the international border between India and Sri Lanka, located at the southernmost end of the Cauvery Delta, along the Palk Strait. V Selvam, former director of coastal systems research project at the Chennai-based MS Swaminathan Research Foundation (MSSRF), said: “I have spent months inside Muthupet mangroves while doing my PhD from 1983 to 1986, and worked with the local communities for mangrove regeneration for around 40 years.

The situation has never been so desperate as it is today. If there is no immediate intervention, the forest and lagoon will die.” In fact, before the cyclone struck, the 2017 report of the Forest Survey of India indicated that the Muthupet mangrove forest cover had increased by about 2,600 hectares between 1995 and 2015, especially in Palanjur, Thamarankottai and Maravakkadu reserve forests of the wetland, thanks to some proactive measures initiated jointly by the forest department, MSSRF and local fishing communities.

Unlike other forests, Muthupet mangroves have an emotional connect with the local community, who for centuries have safeguarded this critical wetland and adopted unique and sustainable fishing practices. Official records show that there are about 22 fishing hamlets around the wetland, with a total population of 37,255.