#SaveMuthupetMangroves: Local fishers refuse to give up hope

As per the detailed project report, a sum of Rs 25 crore has been sought from the ministry for Muthupet mangrove forest restoration.

CHENNAI: Muthupet forest is the only place in the country where a unique “canal fishing” is practised, that serves the dual purpose of providing livelihood for local fishers and keep mangroves in good health. There are about 120 natural canals and 79 man-made fishing canals, each measuring 500 metres to 4 km. These were dug about a couple hundred years ago. M Shankar (50), a fourth-generation fisherman and the president of Village Forest Council in Maravakkadu, said that out of these 200 canals, only 15 to 20 were functional currently, and that all others had filled up with silt.

“Gaja cyclone turned the entire Muthupet forest into a graveyard. Besides uprooting trees, the storm covered all the canals with 3-foot-deep silt. To revive the forest, these 200 canals have to be desilted and we will not let our forest die,” said Shankar. For the past 25 years, Shankar has been mobilising his community to carry out mangrove plantation on 5,000 hectares, with the help of the forest department.
Shankar and his community have so far dug 3,000 feeder canals, which bring water into the degraded areas and help regeneration of mangroves. In Palanjur and Thamarankottai reserve forest, there is still healthy mangrove-cover, thanks to his efforts. Now, these canals are also covered in silt. A Madurai-based NGO, Dhan Foundation, has come forward to desilt at least 50 canals. T Asaithampi, coordinator of Coastal Conservation and Livlihood Development Programme, said the foundation has plans to pump in Rs 5 crore for canal desilting.

It’s been nearly 18 months since the Tamil Nadu forest department has submitted a proposal seeking funds under the National Adaptation Fund for Climate Change, from the Union Ministry of Environment, Forest and Climate Change (MoEF&CC). “We are still awaiting a nod from the ministry,” Syed Muzammil Abbas, Chief Wildlife Warden and Principal Chief Conservator of Forests (PCCF) of Tamil Nadu told Express.

The delay is attributed to the Covid pandemic and the department is yet to get even the annual Budget for mangrove restoration, for the year 2020-21, sources said.As per the detailed project report, a sum of Rs 25 crore has been sought from the ministry for Muthupet mangrove forest restoration.

The project has eight components. Primarily, the funds will be utilised for removal of invasive prosopis juliflora from the mangrove area, regeneration of mangrove biodiversity on 2,500 hectares of degraded area in Muthupet forest range, and desilting old canals to maintain the existing mangrove plantation. 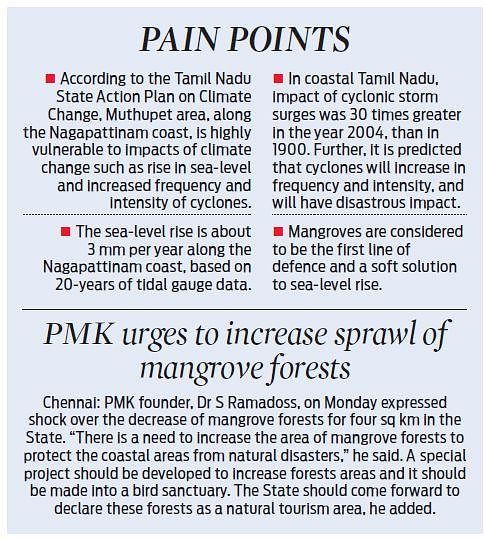 Now we are on Telegram too. Follow us for updates
TAGS
Mangroves