Gulf of Mannar’s Vaan Island: Turning over a new reef

Few years back, scientists thought the Vaan Island, a coral formation in the Gulf of Mannar, would go underwater by 2022.

The Gulf of Mannar’s Vaan Island was expected to be submerged by 2022. But since 2015, its land cover has grown by 54.51 per cent, thanks to an intensive restoration project that involved deploying artificial reefs that went on to be colonised by natural corals. The New Indian Express takes a look at how this model could save other sinking islands nearby.

THOOTHUKUDI: Few years back, scientists thought the Vaan Island, a coral formation in the Gulf of Mannar, would go underwater by 2022. Already, two of the 21 islands in the fragile Gulf of Mannar Marine Biosphere Reserve had been submerged — Vallanguchalli and Poovarasanpatti — and it was only a matter of time before Vaan was also lost.

Then, a miracle happened over the next few years. Today, the Vaan Island is teeming with colourful marine life. The shallow bright blue waters surrounding it are home to healthy coral reefs. Since 2018, the reef cover in the area has seen a steady increase, with mortality rate dropping to negligible levels. It is a first-of-its-kind attempt in India that Tamil Nadu undertook to save the drowning coral reefs.

With several other islands in the same biosphere facing threats due to the degradation of ecosystem, Vaan could become an example, a model that can be replicated to save the entire area, say experts. So, what exactly did Tamil Nadu do to save the dying island?

The Gulf of Mannar is the first marine biosphere in Asia. Yet, there was no comprehensive data on the morphology of Gulf of Mannar islands since the 1969 Survey of India Toposheet. In 2017, to understand the morphological changes in the islands over the last five decades, the Union environment ministry supported a study in the area, conducted by Suganthi Devadason of Marine Research Institute (SDMRI). The study produced some stark data.

It showed that the Thoothukudi group of islands, including Vaan, had experienced the highest percentage of land cover reduction (71 per cent), followed by Keelakarai (43.49 per cent), Vembar (36.21 per cent) and Mandapam (21.84 per cent) groups in the last 49 years. There were multiple reasons why these islands were sinking — unsustainable and exploitative fishing practices, rising sea levels and surface temperature due to climate change, and historic coral mining that went on for decades until it was stopped in 2005. The most significant of these reasons was mining.

The corals were being mined for their rich lime content, which was in great demand in the limestone industry. That apart, it also played a major role in the construction industry. In fact, many old houses in Thoothukudi, that stand tall till today, were constructed using corals. Vaan itself is made up of calcareous frameworks of dead reef and sand, and was a minefield for coral-hunters.

The demand was so high back in the day that in the early seventies, around 25,000 metric tons of corals were mined every year from Palk Bay and Gulf of Mannar combined. It was only after a good three decades, in 2001, that the Centre included all corals under the schedule I of the Wildlife (Protection) Act. Subsequently in 2005, the Supreme Court stayed the coral mining activities. But the damage had already been done. By 2005, the Gulf of Mannar had lost a whopping 32 square kilometres of reef area.

Armed with this data, the Tamil Nadu government started on a mission to revive these islands. It sought financial support from the Environment Ministry, under the climate change adaptation fund. `25 crore was sanctioned, and Vaan Island was chosen for the restoration project. “The reason was because Vaan is closest to the mainland, barely 5 km from the Thoothukudi coast,” says KV Giridhar, director of the Department of Environment. “Reviving Vaan was crucial because the island acts as a defence against waves, preventing coastal erosion.” To save Vaan from drowning, we had to ensure the reef area surrounding the island is revitalised, says Edward Patterson, director of SDMRI.

“Corals need hard substrate to grow. Generally, coral larvae use dead corals as substrate, which unfortunately is not available in many islands of Gulf of Mannar due to decades of mining. Initially, we deployed artificial reefs with the main purpose of protecting the fast-eroding landmass, but in due course, found natural corals colonising in these artificial reefs. This helped Vaan to grow. Compared to 2015, Vaan’s land cover has increased by a whopping 54.51 per cent from 2.33 ha to 3.60 ha in low tide,” says Patterson. A total of 10,600 artificial reef modules were deployed in three phases. 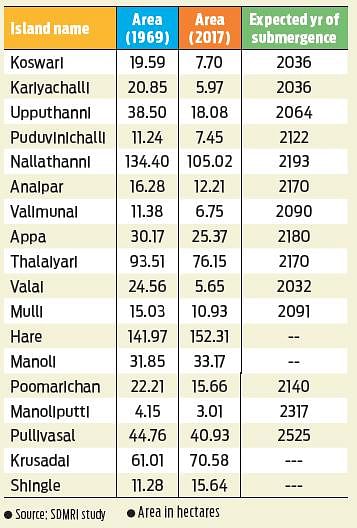 The latest morphological study, conducted by SDMRI in October 2020, shows abundant natural coral recruitment. A total of 10 coral species and 28 fish species were observed around the modules. Indian Institute of Technology Madras (IIT-M) also had an important role to play. The IIT-M team worked alongside SDMRI researchers to design the artificial reef modules. Prof SA Sannasiraj, head of Department of Ocean Engineering, IIT-M, said: “After many trials, we worked out the design, the build, pattern and place of deployment of artificial reefs based on bathymetric wave studies.

The holes in the concrete structure were to achieve good water circulation. The holes are also required for marine growth. The whole experience was unique and path-breaking as such a project was never tried before in India. It gives us great satisfaction that our efforts materialised and corals are thriving on these structures,” he says.

Small success, big lesson
Vaan, however, is not a destination but a mere example. There are many islands in the Gulf that need attention. Researchers say Koswari and Kariyachalli islands near Thoothukudi are facing an increased threat and need immediate intervention.

Morphology and geomorphology studies reveal Koswari island has lost 60 per cent of land cover, and has shrunk from 19.59 hectares to 7.70 ha, while Kariyachalli island land mass shrunk by 71.37 per cent from 20.85 ha to 5.97 ha. The exceptions to this general rule are four islands of the Mandapam group — Hare, Manoli, Krusadai and Shingle — which had their area increased by 16.44 per cent. Hare island is the biggest of all with an area of 152.31 ha.

However, Krusadai and Shingle islands face a threat from a newly-constructed fishing jetty by the TN fisheries department. Despite opposition from the forest department, the fisheries department went ahead and finished the construction of the jetty, triggering erosion problems. If the example of Vaan says something, it’s that the other islands too could soon be home to healthy coral reefs, if due attention is paid and action taken.

Coral reefs in the Gulf of Mannar have shown a great degree of resilience to climate change, but experts say continuous monitoring is needed. As Marimuthu, Wildlife Warden, Gulf of Mannar Marine National Park, says, “Corals here bleach in summer if the water temperature surpasses 300 Celsius. But they recover when the temperature comes down, which usually happens in August. Last April, water temperature reached 31.80 Celsius and partial coral bleaching (less than 5 per cent) was observed.

The high temperatures persisted up to May 2020 (the highest level being 31.90 C) when widespread bleaching was witnessed. This triggered fears of mass bleaching and high mortality.” To measure the prevalence of coral bleaching, SDMRI carried out a comprehensive underwater assessment jointly with the TN forest department from April to June 2020. Eleven islands (Krusadai, Manoli, Hare, Valai, Thalaiyari, Poovarasanpatti, Puluvinichalli, Vilanguchalli, Kariyachalli, Koswari and Vaan) representing the three island groups were assessed.

“This is largely because of low pressure and cyclonic storms that brewed in Arabian Sea and Bay of Bengal in April and May. The water temperature dropped to 28.60 Celsius in early June, which helped the corals restore their zooxanthellae. The bleached corals would completely recover by the end of July.” Significantly, the reduction in sewage inflow, industrial and human activity and halt of fishing during the lockdown assisted in the improvement of reef health, resulting in enhanced fish population and faster coral recovery, Patterson said. 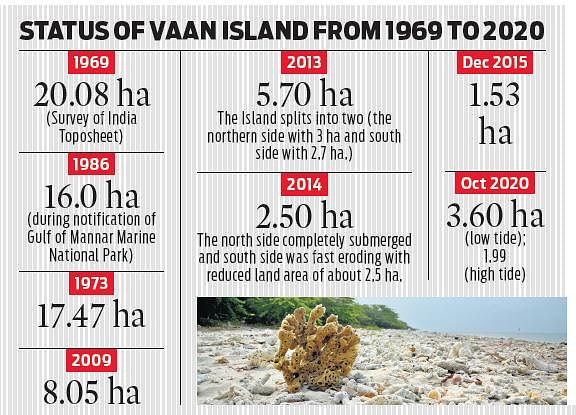 Trap fishing for ornamental fish is practised near the reef area. Indigenously-fabricated fish traps are set in and around the reefs. To keep these traps safe, nearby live and dead corals are broken. Therefore, the reefs are disturbed when laying and retrieving the traps. Marine biologist G Mathews says, “In most cases, the traps are laid mainly to catch reef-dwelling herbivores such as the parrot fish, which in turn cause the proliferation of algae over live coral colonies due to the lack of predators, leading to coral mortality and ecological imbalances.” Parrot fish are colourful and voracious herbivores that spend up to 90 per cent of their day eating algae off of coral reefs with their beak-like teeth.

“Though it is not consumed locally, it’s exported to China, among other countries,” says Mathews. The Global Coral Reef Monitoring Network of IUCN released a report in 2014 on Caribbean corals, which reportedly declined by more than 50 per cent since the 1970s. The report says most Caribbean reefs have been dominated by algae and it was linked to overfishing of parrot fish.

The healthiest Caribbean reefs are those that still have robust parrot fish populations, such as Bermuda and Bonaire, which restricted or banned fishing practices that harm parrot fish, including fish traps. Forest range officer R Raghuvaran said regular patrolling is conducted in reef areas. “Me and my staff are internationally-certified scuba divers.

We regularly monitor the health of coral reefs and remove fish traps laid in the reef area. Fishermen are now aware that damaging coral reefs is an offence. Coral mining was completely stopped since 2005, but poaching of protected sea cucumbers still gets reported.”

How fast are other islands in Gulf of Mannar sinking?

The average prevalence of bleaching in the three island groups is 28.20 per cent, according to an underwater
assessment by the SDMRI and the Tamil Nadu forest department. The Thoothukudi group of islands
had the highest prevalence (30.80 per cent), followed by the Mandapam and Keelakarai groups

Now we are on Telegram too. Follow us for updates
TAGS
Gulf of Mannar Vaan Island