Tamil Nadu is winning against COVID-19, but don’t relax yet

Positivity rate has fallen and doubling time risen; no of fatalities has reduced and 90% of hospital beds are vacant.

CHENNAI: Several indicators — such as the test positivity rate, case curve, doubling time and death rate curve — help assess the intensity and spread of the pandemic; and Tamil Nadu has shown an improvement in all these indicators. The doubling rate of Covid-19 cases in the State is presently 593 days, a sharp increase since October, when it was 73 days. As the name implies, the doubling rate represents the number of days it takes for the number of Covid-19 cases to double from the present period.

In context, the State has 8,25,537 positive cases, and it may take as long as 593 days for this number to double. This is because the number of new cases per day has reduced significantly. Till October 10, the doubling rate was less than 100 days, while during the peak period of the Covid-19 outbreak, from May to August, it ranged between 10 and 30 days.

Similarly, the test positivity rate has come down from 10 per cent in June to 1.25 per cent in January, as Tamil Nadu continues to test more than 60,000 people daily. The number of Covid-19 cases recorded per month has also decreased from a high of 1.82 lakh in August to 36,099 in December, and the number of cases reported daily has fallen from about 1,500 in November to less than 800 in January. 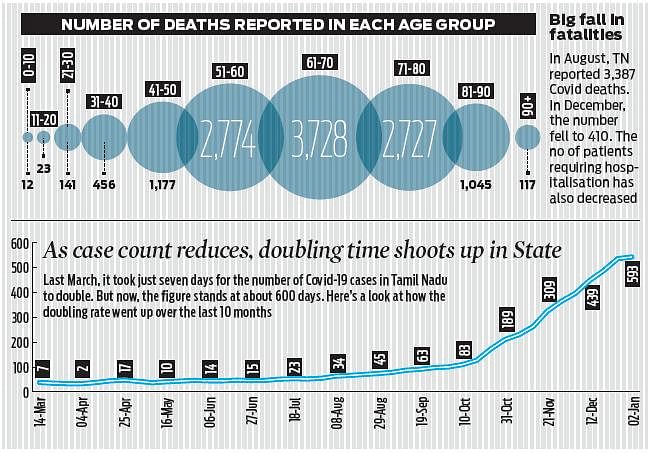 Compared to the high of 3,387 deaths reported in August, Tamil Nadu recorded 410 in December, and doctors say the number of patients requiring hospitalisation has decreased, as about 90 per cent of hospital beds are vacant. Public health experts say the graphs will show it if Covid-containment measures are implemented well over a long period. “But we still need to look at data on things such as the age groups getting hospitalised, and who needs to get admitted,” said former director of Pubic Health Dr K Kolandasamy.

“While long-term data is important, more important is the data on how yesterday’s cases and deaths compare with today’s cases and deaths. The pandemic-control measures are primarily based on the previous day’s numbers,” he added. Health Secretary Dr J Radhakrishnan said that while the numbers show an improvement, it is also important to keep in mind the situation in the US and UK and understand that the public’s compliance with various guidelines, such hand-washing and wearing masks, is important.

“People getting tested if they have symptoms and receiving treatment has been instrumental in improving the numbers, and we should not feel that we can abandon all (precautions),” he said. Radhakrishnan said the biggest worry seems to be non-compliance with physical distancing norms in public places. “Even at functions that I attended, proper physical distancing was not maintained and the organisers of the events did not comply with the norms,” he pointed out.

Now we are on Telegram too. Follow us for updates
TAGS
COVID 19 Tamil Nadu Tamil Nadu COVID cases