The groom's father A Mohan, 52, is the Salem district secretary of the Communist Party of India (CPI). The bride who is a relative, however, comes from a Congress family.

SALEM: Weddings rarely draw the attention of the general public unless they involve celebrities but this one in Salem on Sunday is an exception. The invitation has gone viral -- because Socialism will be entering into wedlock with Mamta Banerjee!

The groom's father A Mohan, 52, is the Salem district secretary of the Communist Party of India (CPI). Mohan contested from the Veerapandi constituency in the 2016 Assembly elections on behalf of the People's Welfare Alliance. 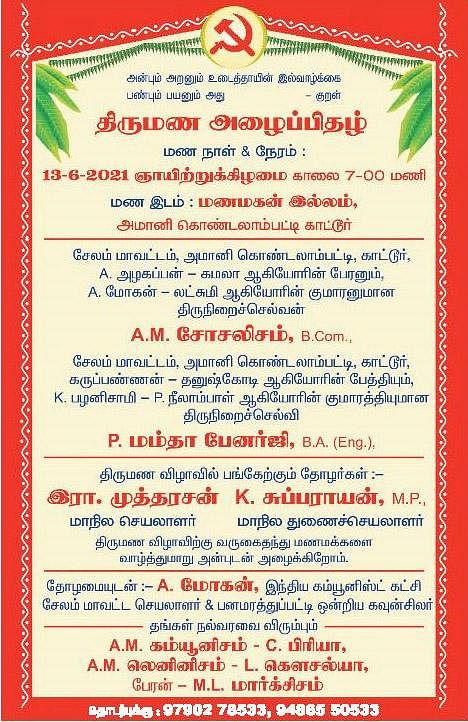 Speaking to The New Indian Express, Mohan said, "My father and grandfather are communists. From the age of 18, I started participating in protests organised by the CPI. Later, I became a full-time worker of the CPI. Due to the Soviet Union breaking up into many countries, many said communism is dead. This made me upset and even before my marriage I decided to name my sons or daughters in a way that reflects the ideology. Three sons were born to me and I named them Communism, Leninism and Socialism respectively. Most of our comrades named their sons Lenin or Marx. But I don't know whether anyone has been named Socialism."

He said his sons have followed in his footsteps by working for the party. "When they were in school, my sons experienced some humiliation due to their names and many thought they were Christians. But after they entered college, their names attracted many. My first son Communism is a lawyer by profession and my second son Leninism and third son Socialism are running a silver anklet manufacturing unit in our home. All three are working for the CPI. Following my decision, my son Leninism also named my grandson Marxism," said Mohan.

Amidst the wedding preparations, Mohan has been greeted with a deluge of phone calls. "We are arranging a simple marriage in our home this Sunday and the CPI state secretary R Mutharasan will also be present. I don't know who circulated the marriage invitation on social media. As phone numbers are also printed in it, hundreds of people are calling daily to express their wishes. We will die one day. But these names which reflect our ideology will live forever," he added.

Now we are on Telegram too. Follow us for updates
TAGS
Salem Mamata Banerjee CPI