In 1927, even before Independence, India got its first female legislator. Dr Muthulakshmi Reddy from Tamil Nadu was nominated to the Madras Legislature’s legislative council.

CHENNAI: In 1927, even before Independence, India got its first female legislator.

Even so, around a century later, the issues plaguing women representation in the Tamil Nadu Assembly warranted this report.

Around 10 per cent or less contestants in the ensuing Assembly elections are likely to be female. This belies the fact that Tamil Nadu elected former chief minister J Jayalalithaa six times.

Taking into account all elections since 1967 in Tamil Nadu, on an average, less than five per cent of MLAs are women. Why is this so?

“Presence of one strong political leader does not mean Tamil Nadu politics is inclusive for women. It may not seem outlandish to voters to see women take part in politics, but they have not gotten used to it. A significant number of female politicians is needed bring about that change,” she added.

In Tamil Nadu, female voters outnumber male voters, yet less than one in 10 contestants are women.

“Even women sharing stage space in political meetings is not usual, and people are not used to always seeing women faces in politics,” Tara further said.

While a significant portion of grassroot-level party workers are women, the numbers taper significantly higher up the ladder.

“Even when women get prime party postings, their decisions are often influenced by male leaders. Women mostly get to function within the women’s wings of parties, while the party is run by men alone. What’s so surprising about that?” she asked.

“Let’s say a woman legislator has done a lot of work in her constituency. She may not even get a poll ticket next time due to alliance equations. There are practical difficulties for the party as well,” she said.

Both Balabharathi and Vijayadharani opined that passing of the Women’s Reservation Bill will be the first step in bringing gender parity in politics.

The Bill, which is pending in Parliament, proposes an amendment to the Constitution to reserve 33 per cent of seats in the Lok Sabha and all State legislative Assemblies, for women.

The Bill also proposes that a random one third of village council leader, sarpanch, and gram panchayat posts should be reserved for women.

“The Central government has brought in the Farm Bill, Citizenship (Amendment) Act, and other legislations hurriedly. Why have they not passed the Women’s Reservation Bill, in spite of us pushing for it so much?” asked Vijayadharani. 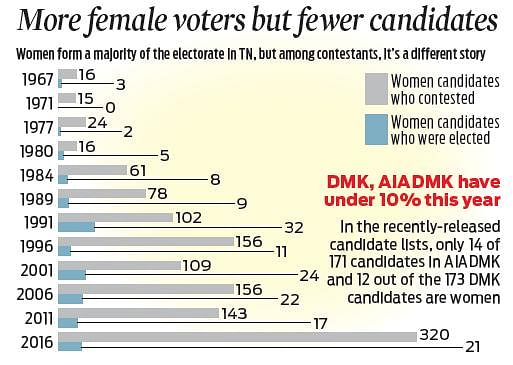 It is worth noting that the number of female MLAs shot up significantly after Jayalalithaa became the first woman chief ministerial candidate to win the popular mandate.

Less than 10 women were elected to the Assembly till 1989. However, when Jayalalithaa became the CM in 1991, there were 32 women in the State House.

Evidently, having a powerful female leader at the helm boosted women representation.

Vijayadharani attributes her political success to her financial independence.

“Incumbent female politicians should cultivate a second generation of leaders in the party. A decade ago, I enrolled 320 women into the Mahila Congress. Their functioning was so effective that at one point the AIADMK and other parties tried to poach our candidates,” she further said.

“Whenever she met women cadre, Jayalalithaa patiently listened to their grievances and gauged their potential. If she understands that a cadre has calibre to fight the odds, the next opportunity will surely be provided to her. Lot of efficient women got postings and poll tickets due to Jayalalithaa’s belief in them,” Valarmathi underlined.

Vijila Sathyanath, former MP and AIADMK’s women wing secretary spoke to The New Indian Express and said, “Jayalalithaa allowed six women cadres for mayor out of ten mayor posts. Of them, only four mayor postings are reserved for women but she allowed women even in the general seat,” she pointed out, adding that many women were given the chance at Rajya Sabha seats and leadership roles in local bodies.

Apart from state-based reservation, another impediment to women is the hostile political environment at the grassroots. This is also one of the reasons why it is easier for women from political families to stick around in politics longer as at least basic facilities required for campaigning and travelling are available more easily.

The National Family Health Survey - 4  has shown that even as the employment rate among men and women are not very different, the number of women getting paid in cash is significantly lower, as many get paid in kind. This means that instead of money women get paid with grains or other goods. While this may feed the family, it will not give women financial independence.

DMK MP Thamizhachi Thangapandian said that women should "break the ceiling," and sensitise themselves on their rights. "Not just women in cities, even those in rural should be aware of abortion bill, laws on marital rape and every policy that relates to them," she said adding that this awareness will stir women to participate in polictics.

Tara Krishnaswamy said that another obstacle is the lack of a conducive environment for women to lead a public life. "When there are not enough clean public toilets, how can a woman have a public life?" she asks. She adds that while a female politician can overcome these challenges, "she has to endure that much more adversity to reach the same position as her male contemporary."

Since the turn of the 21st-century female voters have outnumbered their male counterparts in every assembly general election except in 2011. "If political representation mirrors society, it is undemocratic to have a 10 per cent representation in politics when half the population is composed of women," adds Krishnaswamy.

(With inputs from S Kumaresan)

UN: Over 270 migrants rescued and detained in Libya