Even weeks before the polls, the Congress has given up on the contest for Yanam seat as most of its leaders in the region have deserted the party.

PUDUCHERRY: Even weeks before the polls, the Congress has given up on the contest for Yanam seat as most of its leaders in the region have deserted the party. No nomination was filed from Congress side even on the last day to file papers, for the constituency, from where NR Congress founder president N Rangasamy will also seek mandate in addition to his Thattanchavady segment.

Former Health Minister Malladi Krishna Rao, who had won the Yanam seat for Congress for two decades, recently quit the party and has extended support for Rangasamy. Rao’s desertion at the 11th hour left the party with no time to develop Congress’ presence in the region or establish a rapport with the voters to find a suitable candidate. In Thattanchavady, CPI candidate Sedhu Selvam has been fielded against Rangasamy.

Though the NR Congress-BJP-AIADMK combine had announced that it will face polls under the leadership of Rangasamy, the BJP has not yet recognised him as their chief ministerial candidate. Political observers feel that the grand old party had to field weak candidates in many seats as the jumping ship of large number of cadre depleted its core strength. Adding insult to injury, the party has to now face turncoats in Kamaraj Nagar, Indira Nagar and Kadirgamam. 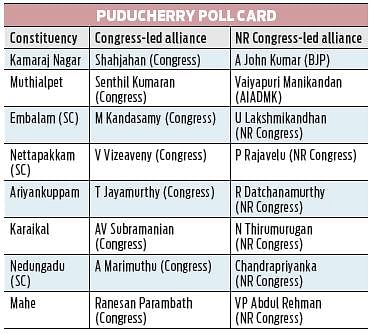