DMK ‘Harbours’ hopes of another win from its bastion

Harbour constituency can be unquestionably called the ‘DMK fortress’ because the party has won nine out of ten times it has contested the seat since 1977.

CHENNAI: Harbour constituency can be unquestionably called the ‘DMK fortress’ because the party has won nine out of ten times it has contested the seat since 1977. This time, the Dravidian major will face a new entrant - the BJP. Harbour constituency gains significance for two reasons. One, in the 1991 Assembly elections, when the DMK faced a rout with just seven seats in the Assembly against J Jayalalithaa, who had just taken the reigns of the AIADMK, Harbour sent Karunanidhi to the Assembly.

Two, with the north Indian population approximately being one-fourth in the constituency, the BJP hopes to make a mark here. They are spread out all over the busy Sowcarpet area, which is famous for clothes, north Indian cuisine, business, and kite-flying activities. In 2016, BJP fielded a candidate from the north Indian community, garnering 12.8 per cent votes and came third in the race. DMK’s PK Sekar Babu defeated AIADMK by a margin of 5,000 votes and entered the Assembly.

Being the constituency with the least number of voters (1,76,272) among all 234 constituencies, the vote margins here have mostly been neck to neck. Both parties, DMK and AIADMK have had their traditional vote banks intact here, but, however, the swing has predominantly been in DMK’s favour, which pushed them just over the line.

Sekar Babu (58). a three-time MLA and also a local resident, will take on BJP’s youth wing leader Vinoj P Selvam. While Sekar Babu comes with a rich history in political career for more than three decades, with his wins two times in the nearby RK Nagar constituency for AIADMK before shifting base to Harbour and winning there as well for DMK, the 34-year-old Vinoj is relatively a fresh face to contest in elections and belongs to the family of Rohini Theatre Group in Koyambedu.

If there’s one thing that may work against the DMK, it could be some swing voters who have anti-incumbency sentiments over the prevailing local civic issues. While for the BJP, the disadvantage would be its candidate not being from the local area. Covering areas such as Mint, Harbour, Beach Station, Elephant Gate, Sowcarpet, and parts of Parrys, the voters in Harbour constituency include Dalits, Muslims, Christians, Telugu-speaking people, and other other backward communities belonging to the working-class; and also the north Indian population, which is expected to be around 25,000 to 30,000. 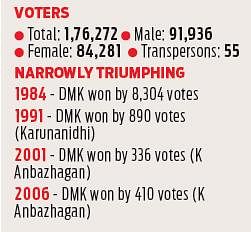 “The people strongly believe in religious unity put forth by our secular alliance and we are getting a good reception among the north Indian communities as well. The BJP will not get the full north Indian votes,” said incumbent DMK MLA Sekar Babu, who also visibly enjoys support from the community during his campaigns. Vinoj, in a recent press meet, has said that his party too has support among all the sections in the locality.

While big leaders are yet to come to Harbour to campaign for the BJP candidate, the DMK is campaigning here with its full might. DMK chief MK Stalin, Central Chennai MP Dayanidhi Maran, Congress leader KS Alagiri, VCK Thirumavalavan, and DMK youth wing leader Udhayanidhi have all graced the campaigns in the constituency recently.

As several Union government ministers are expected to visit the State soon, some of them may visit the constituency in the last leg of campaigning. For 2019 Lok Sabha elections, BJP MP Smriti Irani campaigned here for the PMK candidate, for the AIADMK alliance. However, DMK swept the segment with a margin of 30,000 votes.

CANDIDATES SPEAK
“I will bring in solutions for traffic, water problems, renovating British period sewage lines, add more pumping stations, and car-parking facilities,” promised Sekar Babu. “This is a multi-lingual constituency where different types of people live. My goal is to improve business opportunities here and make it the market of South India,” Vinoj said.