Next month’s poll will see 3,998 candidates contest, as per revised data from the Election Commission.

Next month’s poll will see 3,998 candidates contest, as per revised data from the Election Commission. It was revised as some rejected nominations were initially put on the ‘accepted’ list, sources said. Here’s the updated data 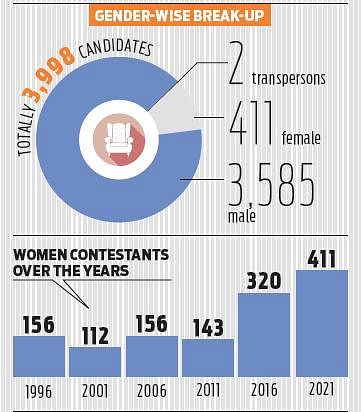 School holidays to train teachers
The School Education Department has declared a holiday for schools in Thiruvallur and Kancheepuram on Friday, and in Chennai on Saturday in view of the election training (Class II) for teachers

Exit polls banned till April 29
The poll panel has banned exit polls for the elections till April 29. They are to be publicized 48 hours before the last hour on polling day. Voting will be  between 7 am and 7 pm on April 6