The transport department has decided to constitute a road safety fund for taking up various safety measures and also start a special wing for road safety.

HYDERABAD: The transport department has decided to constitute a road safety fund for taking up various safety measures and also start a special wing for road safety. The fourth state Road Safety Council meeting held under chairmanship of transport minister P Mahender Reddy at the Secretariat here on Monday took these decisions. The meeting also decided to set up trauma care units on NHs 44, 163 and 65. Each trauma care unit would be set up at every 50 km and these units would be attached to 108 ambulances.

BICYCLE TRACKS: Bicycle tracks would also come up on  roads to ease traffic. The meeting has decided to include  road safety lesson in primary and higher education  and also in the curriculum of universities, Mahender Reddy said. 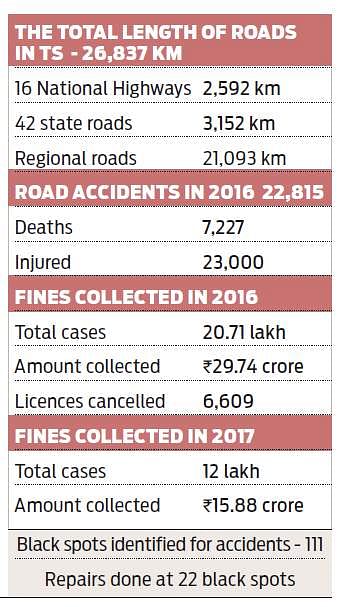 CM instructs officials to implement road policy
Hyderabad: Chief Minister K Chandrasekhar Rao instructed officials to implement the roads policy, which was prepared for the ST habitations, from this year onwards. Responding to reports appeared in a section of the media about hardships faced by people in the remote Utnoor area in Adilabad district due to lack of proper road network, Rao spoke to special secretary Bhoopal Reddy and others on Monday. Rao instructed for the immediate construction of road connecting Donga Chintha to Sonapur road. He wanted this road to be included in the first year road network works and also wanted works of other roads in ST habitations to begin immediately. On Rao’s instructions, Bhoopal Reddy held a meeting with Tribal Welfare secretary Mahesh Dutt Ekka and commissioner Laxman. They discussed the road network in the 1,200 ST habitations and decided to have road network in 432 habitations in the first year with an estimated cost of H250 crore.