Rest of the irrigation projects on Godavari and Krishna in state have dried up.

HYDERABAD: Around 220 tmcft of Godavari water has gone waste into the sea from Medigadda area in the current water year while rest of the projects on the Godavari and Krishna in the state have become dry.
Medigadda is the point where state government proposed to build Kaleshwaram lift irrigation project. As there is no water in any reservoir and there is no mechanism in place now to tap water from Godavari, the government is worried about meeting the drinking water needs of Hyderabad. Therefore, the government asked officials not to release water from the Singur reservoir in Medak district for agricultural operations. The Singur water is saved for the future water needs of Hyderabad in case the precarious situation  continues.

Last year, Chief Minister K Chandrasekhar Rao had himself asked officials to stop releasing water from Singur to Hyderabad. Accordingly, Singur water was released for agricultural operations, helping the farmers heap a bumper crop last year after a gap of 30 years.But this year the situation is altogether different. As of now, there is no problem for agricultural operations in the state. “Farmers raised crops depending on the borewell. Cultivation of paddy could not be taken up only in 3 lakh acres. The normal sowings have been completed,” an official in the agriculture department said.

After the initial rains, there have been no rains in the state for the last two weeks. This year, the Kadem reservoir too did not receive water for the first time. In the past, even during the dry spells, Kadem used to receive surplus water. The only hope for the government now is that there are chances of good rains till the last week of September. 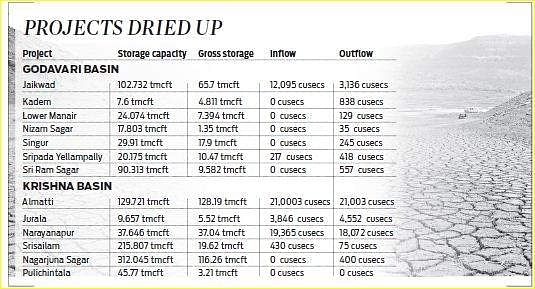 Stay up to date on all the latest Telangana news with The New Indian Express App. Download now
TAGS
Godavari