BJP to use Hyderabad liberation day to corner TRS

WARANGAL: Ahead of BJP national president Amit Shah’s next round of visit to state, scheduled to be held from September 10 to 12, the Saffron party which is striving hard to gain foothold in TS, has resolved to corner the state government by demanding it to observe September 17 as ‘Hyderabad Liberation Day’ officially.

The party which wants to utilise state government’s decision to provide 12 per cent reservations to Muslims to woo Hindu voters to its side, is of the view that Hyderabad Liberation Day issue will be helpful to it to strengthen its base in the state.During the first day of the party’s state executive meeting, began here on Saturday, the BJP state leadership decided to use this issue to corner state government. 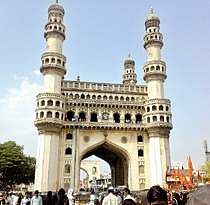 Party leaders T Rajeshwara Rao, G Premender Reddy and Warangal urban president Rao Padma, said the BJP had been demanding for observing September 17 as ‘Hyderabad Liberation Day’ officially since 1998. They said they would make the issue a peoples’ movement to exert pressure on the state government to observe the day officially.

“Chief minister before coming to power supported the demand for observing 17 as Hyderabad Liberation Day officially. But, now, buckling under the pressure from MIM he is not doing so,” he said.
The BJP state leadership also decided to undertake massive agitation programmes against TRS government’s alleged failure in the coming three months.

Rajeshwara Rao said the party would make land mafia, drug mafia and adulteration mafia a major issue and demand the government to order a comprehensive probe in to the issue. The BJP leader alleged that ever since the drug scam had surfaced, the government was trying to hush up it rather than going into its details.

All eyes on Ram Madhav
All eyes are on the concluding session to be held on Sunday in which party national general secretary Ram Madhav would be taking part. Following BJP veteran M Venkaiah Naidu’s retirement from the BJP affairs, Ram Madhav and P Muralidhar Rao, are being projected by the party leaders from the two Telugu-speaking states as the leaders, who are next in line to lead party in the Telugu land.

The argument within the party circles is that both Ram Madhav and Muralidhar Rao, who belong to AP and TS respectively, are expected to play key role in the affairs of the party to realise the party national leadership dream of capturing the Telugu land. Hence, BJP TS unit leaders are curious about speech to be delivered by Ram Madhav on Sunday’s meet.

Now we are on Telegram too. Follow us for updates
TAGS
Amit Shah BJP National President