HYDERABAD: Expect more raids, searches and investigations by the Income Tax Department this financial year. The IT Department, which has been in a hyperactive mode since the last couple of years, has been allocated a staggering budgetary target of Rs 11.5 lakh crore for the 18 IT regions across the country, including Chennai, Bengaluru, Hyderabad and Kochi, by the Finance Ministry.

Of the total amount, target set for corporate tax collection is Rs 6.21 lakh crore, personal income is Rs 5.18 lakh crore and for securities transaction is Rs 11,000 crore. According to the allocated targets list sent to the Principal Chief Commissioners of 18 Income Tax regions, a copy of which was accessed by Express, the Corporate tax target set for Hyderabad region is Rs 26,987 crore and personal income tax target is Rs 33,858 crore.

Last financial year, all India tax collections stood at over Rs 9.86 lakh crore, while in Hyderabad region it was Rs 49,780 crores. This year, the attempt is to boost the figures to Rs 11.5 lakh crore and Rs 60,845 crore respectively.

Similarly for Chennai, Rs 43,136 crore is the Corporate tax target, Rs 38,935 crore is the personal IT target and Rs 75 crore securities transaction tax target, totalling a whopping Rs 82,146 crore. Last financial year, the tax collected was the to the tune of Rs 68,715 crore.

The targets are much higher for Bengaluru, at Rs 61,483 crore for corporate tax and Rs 61,577 for personal tax, totalling a massive Rs 1.23 lakh crore. Last financial year, Rs 1.04 lakh crore was collected from this region as taxes.

Though senior officials admit that it’s normal for targets to be increased every year, the numbers appear to be staggering this time around as the general expectation among the tax payers was that the Centre would go slow this financial year as the country goes for general elections in 2019.

“Things have clearly heated up for the IT department and also for tax payers,’’ remarked one official adding that the staggering targets meant more raids, searches and investigations.
Experts are of the opinion that unrealistic targets can be avoided by taking a base year’s collection figures and going for targets on a straight line based method. ‘’For example, if the tax collection figures of the year 2015 is taken as a base, the target can be fixed at 15 per cent above the 2015 collections every year,’’ they say.

Instead of going for a compounding rate of growth in setting targets by taking every year as a new base is going to result in very high unrealistic targets which will be detrimental to both, the tax payers and taxmen, who will then be forced to squeeze out every rupee from tax payers to meet the targets. ‘’Like philosopher and economist Chanakya says the collection of taxes should be like a honey bee collecting nectar from the flower. But the tax department seems to have given a go-by to this famous Chanakya dictum,’’ says a financial expert. 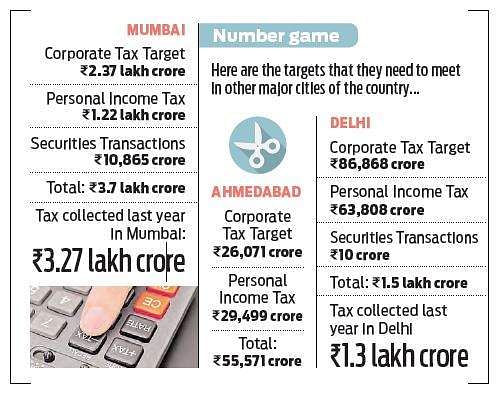 Now we are on Telegram too. Follow us for updates
TAGS
chennai Kochi Income Tax Department