HYDERABAD:Calling the 16 per cent Interim Relief (IR) deal struck by the Telangana Mazdoor Union (TMU) with the State government a betrayal for the Telangana State Road Transport Corporation (TSRTC) employees, members of non-recognised unions on Sunday questioned as to what assurance the State government had given on rest of the demands put forth by RTC staff. The unrecognised unions of TSRTC that had lent support to the TMU for the statewide strike proposed to be organised from Monday will now sit on dharnas at RTC depots and sport a black badge in protest against the way the TMU had agreed to the State government’s proposals.

The TMU had earlier called for a strike on May 7 and had put forth a set of demands to the State government. On May 9, the National Mazdoor Union (NMU) and the Joint Action Committee (JAC), representing eight other unions, also called for a strike and extended their support to TMU. As on Sunday, after much deliberations from the State government, the recognised union of RTC - TMU - agreed to withdraw their proposal to go on strike after agreeing to a 16 per cent IR. Though unhappy, all other unions too  have decided not to go ahead with their strike proposals.

“We are unhappy with the deal struck between TMU, and whatever agreement they did has betrayed the RTC employees. They gave in to the State government’s pressure despite having our support and even after some political parties came forward with support,” said Ashok Kumar, deputy general secretary, NMU.

It may be mentioned here that the unions had asked for a 25 per cent IR but only 16 per cent was approved by the state government. Except for one demand, no other demands put forth by the unions had been accepted, he said. “We will take up this issue and go on a campaign to inform all RTC employees at all depots. At the time of next general elections, we will take a call on if RTC employees will support this government or not,” he added.

‘Don’t be too demanding’
When asked what made TMU agree to the 16% IR, general secretary for TMU, V Thirupathi, said, “We had put forth a request for 20 per cent IR but then we brought it down to 18 per cent, we did what we could, but it was settled at 16 per cent. The ministers tell that they will give us more during fitment time and asked us not to be too demanding about the IR.”

Will TSRTC be divided?
Harish Rao announced that a high level panel will be set up to prepare an action plan on how to bail out RTC from the financial crisis, as the corporation is incurring losses. Earlier, government gave a leak saying that the loss-making TSRTC will be divided into four separate corporations. Now, argument among employees is that the proposed committee might devise a plan to achieve this goal 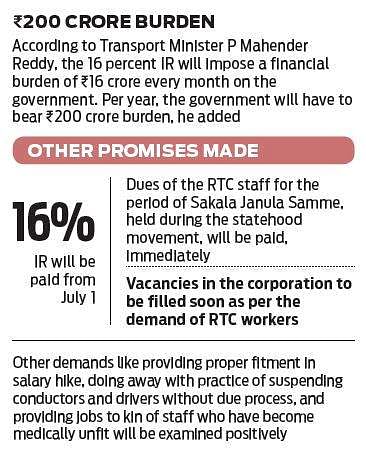 Now we are on Telegram too. Follow us for updates
TAGS
Telangana State Road Transport Corporation TSRTC