Reddy made these comments after inducting several student leaders and students from OU into Congress at Gandhi Bhavan in Hyderabad.

HYDERABAD: TPCC chief N Uttam Kumar Reddy on Friday came down heavily on caretaker Chief Minister K Chandrasekhara Rao for neglecting Osmania University during his more than a four-year rule. Reddy made these comments after inducting several student leaders and students from OU into Congress at Gandhi Bhavan in Hyderabad. 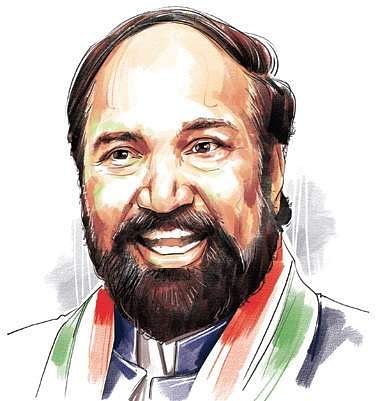 Speaking to the gathering, Reddy said that the university’s students had played a major role in the Telangana movement but the TRS government had failed to give it due importance. He appealed to the students to help put an end to TRS rule in the State. “KCR was responsible for OU losing out on the chance to hold the Indian Science Congress,” he alleged. Reddy also said the TRS chief had obstructed Rahul Gandhi’s visit to the university.

“Students’ sacrifices helped KCR come to power. But after assuming power he has completely neglected students and youth. KCR did not even give appointments to OU leaders who wanted to meet him. KCR is the number one cheater in Telangana,” he said. The TPCC chief then went on to say that the TRS government had failed to fill up vacant posts in OU. “He has not released money for fee reimbursement but has the gall to build a palatial bungalow for himself using hundreds of crores,” he said.

“Congress government will be sworn in on December 12. We will notify recruitment for one lakh jobs within a year and will also announce a mega DSC for recruiting 25,000 teachers within 100 days of assuming power. We will also revive ITIR to create more jobs. We will bring Coach Factory to Kazipet and Tribal University to the State,” said Uttam. Uttam further alleged that KCR had given `5 crore to each TRS candidate for their campaigns. “Where is this money coming from? Perhaps this money is what they looted from the people over the last four and a half years,” he said.

The Congress leader then said KCR, despite claiming that he wasn’t worried about the grand alliance at all, was nevertheless getting worked up about Congress’ alliance with TDP. “Why does he care about our alliance? TRS leaders said our promises cannot even be implemented, but they have just copied our manifesto. In fact, they have just added `16 to our promises and are publicising them as their ideas,” he added. Alleging that KT Rama Rao had obstructed AICC president Rahul Gandhi from coming to OU, he mocked Rao saying,” KTR is a baccha. The amount of work he does and the arrogance he exhibits are inversely proportional.”

All set for new inductions

Another leader, T Krishnaiah, a former MLA from TDP and the party’s CM candidate in 2014, will also join soon. Srinivas and Krishnaiah, both from the Backward Castes community, are expected to bring in BC votes for the party. These leaders, along with suspended TRS leader from Gajwel Narsa Reddy, with join the party in the presence of Rahul Gandhi.

“D Srinivas, R Krishnaiah, Narsa Reddy will join the party in the presence of AICC president Rahul Gandhi in Delhi,” confirmed RC Khuntia, Congress’ Telangana in-charge, speaking to  Express.
Meanwhile AICC’s screening committee, led by Bhakta Charan Das interacted with Congress ticket aspirants on Friday at Gandhi Bhavan. The committee will submit its final report in a few days. Only after this report is submitted, will the party high command finalise candidates, probably in the first week of November.