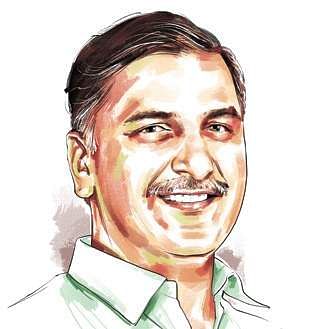 “KWDT-1 observed that Tungabhadra tributary has to contribute substantial flows to Krishna, the main river, in order to meet the requirements of downstream projects.”

“But, the present proposal of AP to divert about 40 TMC from Tungabhadra would completely diminish the flows and adversely affect projects of Telangana,” Harish Rao said in his letter. He also sent a copy of the AP government GO issued for the diversion of the water.

Sangareddy: IT seems that the burden of TRS victory in united Medak district has fallen on the shoulders of Harish Rao. Rao, who was in Siddipet for poll campaigning, was said to have been suiting up contenders from TRS against top leaders of Congress in Medak. It is learnt that he would focus his attention towards constituencies like Zahirabad, Narsapur, Andole and Sangareddy from where top Congress leaders J Geeta Reddy, V Sunita Reddy, Damodar Rajanarsimha, and Jagga Reddy would respectively be contesting. TRS would be fielding notable opponents in these places.