Congress to take out padayatra on PRLIS

HYDERABAD: In  order to exert pressure on State government to construct the Palamuru-Rangareddy Lift Irrigation Scheme (PRLIS), the Congress party, under the leadership of former MP Konda Vishweshwar Reddy, will go on a 88-km-long ‘padayatra’ from Dhobipeta village in Shankarpalli mandal to Laxmidevipalli on August 27. 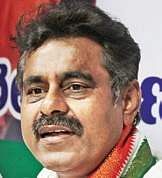 Stay up to date on all the latest Telangana news with The New Indian Express App. Download now
(Get the news that matters from New Indian Express on WhatsApp. Click this link and hit 'Click to Subscribe'. Follow the instructions after that.)