A couple of weeks ago, Commissioner of Telangana Open Schools Society had issued orders to the District Education Officer, P Sarojini, to remove Mangala as Coordinator.

NALGONDA: A woman working as headmistress at a government school is alleged to have forged the signature of KT Rama Rao. M Mangala, apart from being headmistress at ZP high school in Ravulapenta village of Vemulapally Mandal, has also been working as Coordinator to Nalgonda district open school, on deputation.

A couple of weeks ago, Commissioner of Telangana Open Schools Society had issued orders to the District Education Officer, P Sarojini, to remove Mangala as Coordinator. The Commissioner has now made the school assistant the in-charge.

Mangala, on the other hand, forged KT Rama Rao's signature on a government letterhead and issued a recommendation letter to the Commissioner of Telangana Open Schools Society. A copy of the letter dated September 13, 2019 is marked to DEO, Nalgonda and Director, Telangana Open Schools Society. The letter read: "It has been brought to my notice that Smt Manavath Mangala who is currently working as the Open School Coordinator for the District of Nalgonda working as the Principal in Girls High School in Zilla Praja Parishad Ravulapenta. Request to continue her services as the concerned officer as per the norm."

Some of the Union leaders and education department officials found it fishy and lodged a complaint with the Commissioner.

An inquiry is on. 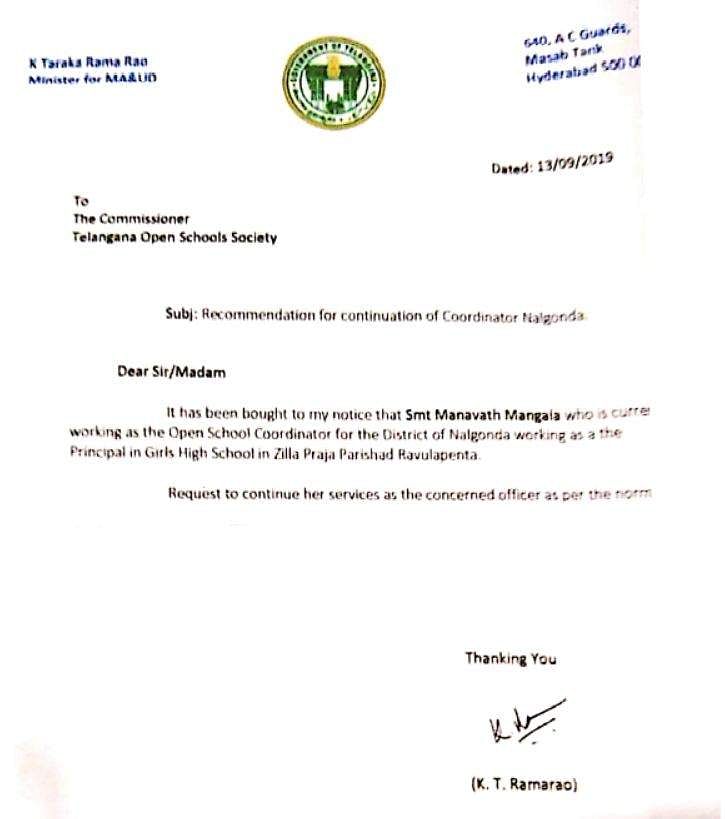