“In a few days from now, I will be a common man. I want to lead my personal life on my terms. I would be retiring to my home town Chennai.

HYDERABAD: “In a few days from now, I will be a common man. I want to lead my personal life on my terms. I would be retiring to my home town Chennai. You come down there, accept my frugal hospitality and ask me about any issue, including whether or not deletion of article 370 was appropriate,” said Telangana Governor ESL Narasimhan, who will soon be demitting office, when a reporter asked him what he had thought about the Centre’s historic decision. 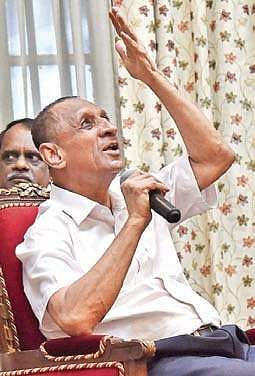 Slippery as the proverbial eel, Narasimhan ducked all the bouncers on policies of the Centre and the State, with a simple answer: “It is out of syllabus” at a farewell media interaction at Raj Bhavan on Tuesday.
Always alert in avoiding media’s booby-traps, the Telangana governor either brushed away questions on contentious issues, contending that he would take things as they come and that if he was what he was today, it was because of God’s grace and luck not running out prematurely.
Narasimhan was, however, was very clear about what had hurt him most during his nine-and-half years of tenure as governor.

“There used to be a tirade against me that there was no temple in both AP and Telangana that I had not visited. There was an extrapolation that I was visiting temples to atone for my sins. Going to a temple is part of my personal life. Why do people pick on me?” he asked and said he treated criticism that he would be best-suited as a priest at a temple as a great compliment.
“What better position would be there other than serving God?” he asked.

He would not allow himself drawn into making any statement as to which was his high point and the low point in his decade-long gubernatorial assignment. He lived life on a day-to-day basis.
“Each morning was a challenge and each evening was a pleasant time,” he said, avoiding being caught in a controversy.

When asked how he felt when law-makers in Andhra Pradesh Legislative Assembly attacked him, uprooted his mike and tore up the Budget speech copies and threw them up to settle down on him in a shower of confetti on the first day of Budget session in 2011, Narasimhan said since he had an inkling about what was going to happen, he was prepared.

“I kept smiling at the MLAs who were throwing tantrums at him. I was determined to read out the entire Budget speech. I had more than one copy of the Budget speech with me. As I knew my mike would be wrenched out of its fixture, I had a wireless one in place. I never grew angry,” he said.

Narasimhan felt happy that he could, with the grace of God and his luck staying with him, steer the State through the troubled times of Telangana movement.

“Though the movement was at its peak, not even one bullet was fired at the activists. God was kind and my luck remained intact. It is not my competence. The police did a great job,” he said and recalled how political groups had acted responsibly to ensure that the agitation would not slip out of control.