The farmers need jobs in the industries,  possibly closer to their own village, to support their families financially.

By B kartheek
Express News Service

HYDERABAD: P Alivelu, a 35-year-old agricultural labourer in Thakkellapally village of Rangareddy district, is struggling to get daily wage work in and around their village due to untimely and intermittent rains. Needless to say, there are several others like her.

They need jobs in the industries — possibly closer to their own village — to support their families financially. However, companies are refusing to hire them citing their age and educational qualifications.

Alivelu said that there was no agricultural work in the village as the farmers here were not cultivating crops owing to the lack of rains in June. As a result, several daily wage workers are left with no jobs.
“We tried to find jobs as sweepers in the company nearby but we were rejected as we were uneducated. 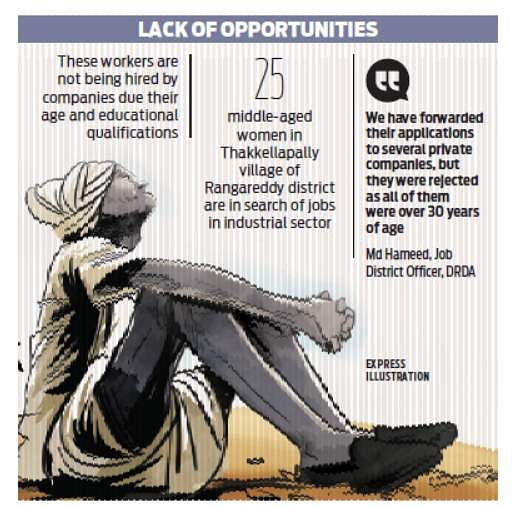 It is depressing to know that even for a sweeper’s post they are looking for educated and young persons,” Alivelu said. When asked about works under the Mahatma Gandhi National Rural Employment Guarantee Act, she said that they were done with the ‘100-day work’ during the previous summer.

The situation is more or less the same for all daily-wage earners in Rangareddy district, says S Sunitha, an activist with Mahila Mandal Development Social Work Society, who works with rural women for their economic upliftment.

These job seekers of Thakkellapally village are facing a unique problem; despite their village being close to the city, they are unable to migrate there as the cost of living in the city is much higher when compared to their village.

Sunitha said: “As part of our work, we impart skill-based training to young women. While this was going on, around 25 middle-aged women came to me seeking jobs. I suggested that they approach the Rangareddy District Rural Development Authority (DRDA).”

About two months ago, they filed applications with the DRDA seeking housekeeping, sweeper or security guard jobs.

Admitting that they had received the applications, Md Hameed, the Job District Officer of DRDA said, “We have forwarded their applications to private companies, but they were rejected as all of them were over 30 years of age. However, we did find one company that was ready to hire them. We would conduct an interaction session at their village to complete the recruitment procedure.”