The elaborate plan was submitted to the GHMC, but action was not taken on it, though it was approved by the standing counsel and technical group.

HYDERABAD: Experts from the Jawaharlal Nehru Technological University (JNTU) gave the state government a report with a plan to tackle urban flooding, but the government seems to have sat on it for about a year. The report recommended building a system of over 450 km of major stormwater drains and 1,092 km of minor storm water drains across the GHMC area to keep rainwater in urban areas from leaving the city.

Titled ‘Urban Floods - Integrated Stormwater Network (Urban Bypass) for GHMC- 229 Locations’, the 2018 report proposed that the water be stored in 636 tanks that could be built both on GHMC and private land. 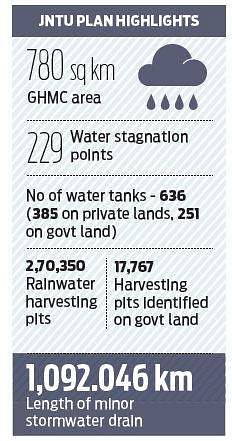 It also recommended digging 2,70,000 rainwater harvesting pits to ensure water from the roof of every house and other structure is not let out into the main stormwater drains. Water from elevated structures, like flyovers and Metro stations, would flow into drains in the median, which would have to be redesigned.

The elaborate plan was submitted to the GHMC, but the action was not taken on it, though it was approved by the standing counsel and technical group. It was stuck at the MAUD level, possibly due to the funding it required. The cost of the plan was about Rs 4,000 crore, and it involved redesigning and reconstructing roads, and using new stormwater drains, as the existing ones have encroached.

The State Experts, however, pointed out that adopting the Rs 4,000 crore plan to tackle urban flooding could, in fact, help the government save money. The authorities and citizens anyway end up spending huge amounts due to traffic congestion, road damages, and maintenance of infrastructure, they argued. “The city is spending roughly Rs 6,000 crore due to continuous traffic congestion, as arterial roads are unfortunately being used for vehicles and water alike,” said Dr Lakshmana Rao, the JNTUH professor who led the study.
Meanwhile, GHMC officials said the plan is still being considered, though there are budgetary concerns. “Naala expansion is essential for the city. This has to be taken up on a priority basis, as all drains are only prepared to receive 1.5 cm of rain in an hour, while nowadays, 4-5 cm of rainfall is received in an hour,” said a senior engineering official from the GHMC. The official also said that going by the assumption that 9,000 km of roads are within GHMC limits, the city needs 18,000 km of stormwater drains, considering both sides of roads. However, stormwater drains are present on only 1,000 km.

Could help save money
Experts pointed out that adopting the Rs 4,000 crore plan to tackle urban flooding could help the govt save money, as Rs 6,000 crore is now being spent due to traffic congestion, road damages, and maintenance of infrastructure