From 4 to 48: After GHMC feat, BJP set to take on TRS in Telangana 2023 Legislative Assembly polls

Even in the divisions where the party lost, it managed to put up a neck-and-neck fight with the pink party, leaving no chance to the Congress party.

By B kartheek
Express News Service

HYDERABAD: After bagging the Dubbaka Assembly seat by subverting the pink base in the segment, the Bharatiya Janata Party (BJP) has showcased yet another remarkable performance, in the Greater Hyderabad Municipal Corporation (GHMC) elections, giving a new shock to the ruling TRS party.

From winning just four seats in the 2016 GHMC elections, the party has come a long way and has managed to bag 48 seats in the 2020 civic body polls. Even in the divisions where the party lost, it managed to put up a neck-and-neck fight with the pink party, leaving no chance to the Congress party. 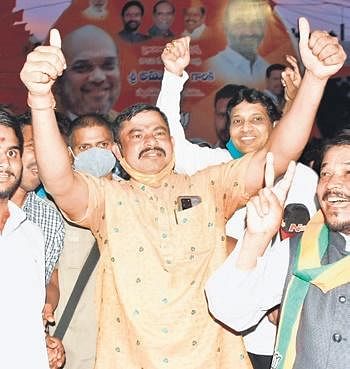 With the confidence that they received from the Dubbaka byelection, the BJP leaders aspired to emerge as an “alternative” to the ruling party by improving the party’s performance in the GHMC elections and now, they can obviously claim that they were almost successful in implementing the plan.

With an aim to bring the party into power, the BJP leaders fought the GHMC elections as a precursor to the ensuing Assembly polls in 2023. Though the BJP may not win the Mayor post in Hyderabad, they can celebrate the GHMC election results as they have bettered their position in the city.

Even Prime Minister Narendra Modi made an appearance during the elections, though not for campaigns. The high-voltage campaign has worked out for the BJP. With communally coloured remarks, in addition to the development narrative, the BJP managed to attract the Hindu voters as well. Party State chief Bandi Sanjay’s remarks of “surgical strikes” in the Old City too seems to have impressed the city voters.

Prime Minister Narendra Modi, Union Home Minister Amit Shah, and BJP president JP Nadda appreciated party State chief Bandi Sanjay and MoS Kishan Reddy over the BJP’s performance in the elections. Tweeting in Telugu, Amit Shah said, “I thank the people of Telangana for reposing trust in BJP which is furthering the development narrative under the leadership of Prime Minister Narendra Modi. I congratulate BJP president JP Nadda, Bandi Sanjay for the victory. I appreciate the hard work of Telangana Karyakartas.” Meanwhile, Bandi described their performance as “saffron strike against TRS”. He also came down heavily on the SEC Commissioner and the DGP for "working at the behest of TRS and MIM". In the meantime, Jambagh division, an MIM stronghold where the party headquarters is situated, was wrested from the AIMIM by the BJP in the civic polls. Needless to say, AIMIM had won the division in the previous polls. Rakesh Jaiswal of BJP won the seat with a majority of 185 votes against the MIM candidate. Moreover, in Charminar zone, the BJP secured seven divisions. The BJP also defeated the TRS in several of the latter’s strong bastions. In LB Nagar, the BJP bagged 15 seats. It won 5 divisions in Museerabad,  four divisions in Sanathnagar and four in Amberpet

Now we are on Telegram too. Follow us for updates
TAGS
GHMC elections GHMC polls