The powerlooms and textile units in Sircilla have received bulk orders for kanduva from private agencies as well as TRS party leaders and activists.

RAJANNA-SIRCILLA: Unbeknownst to him, Chief Minister K Chandrasekhar has become a trendsetter. After he was spotted wearing a kanduva instead of a mask as a precaution against Coronavirus, the demand for the same has gone up. 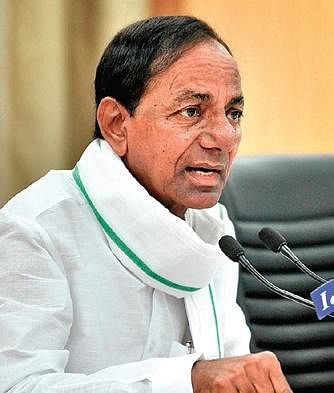 The powerlooms and textile units in Sircilla have received bulk orders for kanduva from private agencies as well as TRS party leaders and activists.Given the multiple uses of a kanduva, people have started using it instead of a mask.Guntuka Koteshwar, a weaver, said he made kanduvas for the Chief Minister and added that he had received an order for making 1,600 kanduvas from the CM.

Following the footsteps of the Chief Minister, TRS leaders placed orders for kanduvas, said another weaver in Sircilla. And this has led to about 5,000 weavers getting direct as well as indirect employment in the erstwhile Karimnagar district.

Elated over the development, the weavers thanked the Chief Minister for encouraging people to wear kanduvas. They told Express that they were importing quality cotton from Ahmedabad in Gujarat, and, Guntur in Andhra Pradesh to make the kanduvas.

Stay up to date on all the latest Telangana news with The New Indian Express App. Download now
TAGS
KCR