Some locals who spotted the tiger fled from the spot in fear, while two youths climbed trees to escape the big cat. 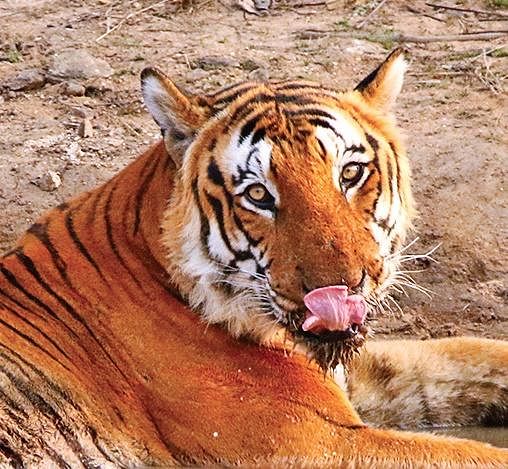 ADILABAD: After several tiger sightings in Kumarambheem Asifabad district, a tiger was spotted once again on the road to the Etiguda village in Bejjur range on Wednesday. Some locals who spotted the tiger fled from the spot in fear, while two youths climbed trees to escape the big cat.

On hearing of the sighting, a team of forest officials visited the area and searched for the tiger’s pug marks and other signs of its movement. Kumrambheem Asifabad  District Forest Officer Shantaram, referring to incident  at Deegada village where a tiger killed a 22-year-old tribal, said they were yet to find signs of movement of the tiger. He said that tiger might have migrated to Maharashtra State.

Now we are on Telegram too. Follow us for updates
TAGS
Kumarambheem Asifabad district Telangana Bejjur