NIZAMABAD: A exorcist, who is also the editor of a local Telugu news magazine Aksharam, was thrashed black and blue by the women’s activists and family members of a minor girl, whom he allegedly raped for a period of three months, in Nizamabad town on Tuesday. The exorcist has been identified as P Shivaprasad, a native of Metpally in Jagtial district. Speaking to Express, the women’s rights activists and family members said the minor girl has been mentally ill for quite some time.

A well-known exorcist in the area, Shivaprasad was approached by the parents of the victim a few months back for finding a cure to the girl’s illness. The exorcist, who promised to cure the victim’s illness through some tantric methods, allegedly raped her every time she was brought to Shivaprasad’s office in Pusalagalli for treatment, they said. In the meantime, the girl recently fell severely ill and was taken to a local doctor who informed the family that she was raped. Later, the minor girl too told her parents that she had been raped for the last three months. She told them that the exorcist had even threatened to kill her if she disclosed the assault to anyone. 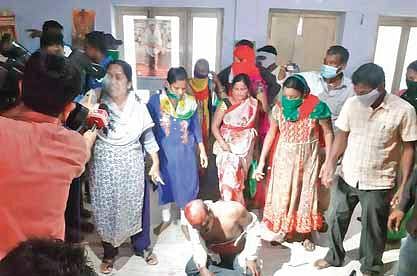 Upon learning about the incident on Tuesday, the victim’s relatives, along with some women’s right activists, reached Shivaprasad’s office and questioned him about the incident. Unsatisfied with his replies, the victim’s relatives entered into an argument with him, which escalated quickly and turned into a scuffle in no time. The activists and others beat up the perpetrator and also damaged his office.

Though he tried to resist and escape from the scene, the irate people continued attacking him and later handed him over to the cops. A police team, under the aegis of One Town station house officer (SHO) A Anjaneyulu, brought the situation under control. Anjaneyulu said that the minor girl has been sent to the Nizamabad Government General Hospital for a medical test. A case has been registered against Shivaprasad.

Now we are on Telegram too. Follow us for updates
TAGS
exorcist Aksharam editor rape Nizamabad Telangana