HYDERABAD:  Almost  four decades after the then Chief Minister, late NT Rama Rao, abolished the Patel- Patwari (Karanam-Munasabu) system and introduced VRO system, Telangana’s Revenue Department is all set to take a new shape. The State Cabinet, which met here on Monday, cleared ‘The Telangana Abolition of the Posts of Village Revenue Officers Bill, 2020’ and ‘The Telangana Rights in Land and Pattadar Passbooks Bill, 2020’.

These two Bills would be introduced in the Assembly on Wednesday, which pave way for major reforms in the existing administration of the Revenue Department. Under the new dispensation, which would come into effect after the Bills are passed in both the Assembly and Legislative Council and the Governor gives her assent, the present Village Revenue Officer (VRO) and Village Revenue Assistant (VRA) system would stand abolished. Ushering in several key changes in the Revenue Department, which is mired in a morass of corruption, the government is unveiling a new legislation. The debate on these Bills will be taken up on Thursday and Friday.

On a day of fast-paced developments ahead of the unveiling of the New Revenue Act, the government on Monday stopped property registrations till further orders. The registrations will resume after the much-awaited Dharani portal is launched. All the records from VROs were taken away by Tahsildars. The New Revenue Act will be a consolidated one, replacing over 100 existing Acts or GOs relating to Revenue Department. “Some Acts are redundant now and they are not of much use. They will be repealed. Some Acts are overlapping with others and they would be clubbed,” official sources said. 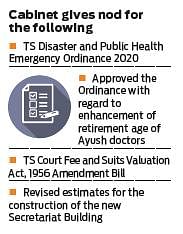 Some Acts were made before 1950 and they were no more relevant now. For example, Acts like Assigned Lands Act were incorporated in the new Act with some modifications. Acts like Joint Pattas Act, 1965, Tenancy Agriculture Land Act, 1950, Atiyat Inquiries Act, 1952 and others would be repealed. The new Act is expected to provide quality services to the citizens. Once the Dharani website is launched, the Pattadar Pass Books (PPBs) will be updated in real time like a bank passbook. The mutation of land records too will be done simultaneously. This will help in reducing time and travel of farmers while updating their PPBs.

Where will the VROs go?

After aboliltion of the village revenue officers system, what is the alternative? When the VRO system stands abolished, it is not yet clear whether they would be transferred to other departments or would be retained in the same revenue department and given a different set of responsibilities. Meanwhile, Telangana Village Revenue Assistants Association (VRAAs) General Secretary Vanguru Ramulu demanded that the State government withdraw the proposal to abolish VRO and VRA system. However, Telangana Village Revenue Officers Association president Golkonda Satish said that they are not against any administrative reform but the government should discuss the new Act with all the stakeholders before taking a final decision.

Now we are on Telegram too. Follow us for updates
TAGS
NT Rama Rao VRO system