On Friday, MPTCs and sarpanches from Jammikunta of Huzurabad constituency met Kamalakar at his camp office and explained the local problems to the Minister.

KARIMNAGAR:  BC Welfare Minister Gangula Kamalakar, on Friday, flayed former minister Eatala Rajender for thinking that he was above the party. He said that it was the party that was important and not any individual. “Eatala insulted government welfare schemes like Kalayana Laxmi and Shaadi Mubarak. It is improper for a former Minister to criticise the schemes after enjoying various positions  in the party for over 20 years,” said Kamalakar. 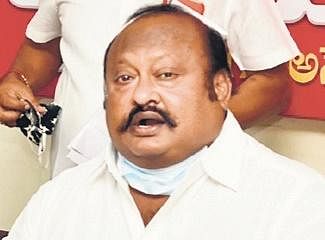 He said that the former minister’s secret understanding with BJP and Congress leaders have been exposed. He also alleged that Rajender hatched a conspiracy to split the party.“Rajender won about six times on the TRS party ticket only because of K Chandrasekhar Rao’s image and not his own influence. His rebellious attitude is not correct,” fumed Kamalakar.

On Friday, MPTCs and sarpanches from Jammikunta of Huzurabad constituency met Kamalakar at his camp office and explained the local problems to the Minister. Asking the party workers not to worry, he assured that all their  problems would be solved soon. MLC Naradasu Laxman Rao and Satavahana Urban Development Authority (SUDA) chairman GV Ramakrishna Rao were also present on the occasion.

Now we are on Telegram too. Follow us for updates
TAGS
Gangula Kamalakar