Ministry to woo Russians back to incredible India

Officials and tour operators feel that recent attacks on tourists in India are to blame for the poor turnout of 2.6 per cent travellers in 2016.

By By Kumar Vikram

NEW DELHI: Not very long ago, showman Raj Kapoor was famous for familiarising India with Russia. But of late, India seems to have fallen out of favour with Russians.According to data procured from the Ministry of Tourism, tourists from Russian federation contributed only a mere 2.6 per cent to the total tourist footfall in 2016. Concerned over the low numbers, the ministry has planned brand promotions in five Russian cities. “Many tour operators in Russian cities are not aware about the tourism potential India has. They will be invited to the event and they will be made aware of the country’s rich heritage values. They will also be informed about the luxurious facilities for tourists,” said a senior official of the ministry of tourism.

The ministry’s efforts gain significance in the backdrop of the recent meeting between Prime Minister Narendra Modi and Russian President Vladimir Putin. This was Modi’s second meeting with Putin in the last one year. Officials of the tourism ministry said that five meets will be held in the coming months in five different Russian cities targeting Russian tour operators. 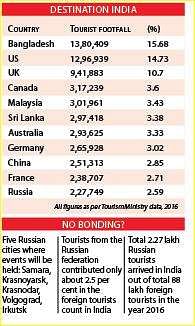 Officials and tour operators said that one of the many reasons for low numbers of Russian tourists to India could be the attacks on Russian tourists. In November 2015, a Russian woman was attacked with acid in the PM’s constituency, Varanasi. Another Russian tourist was beaten up after offending locals in Goa in 2014.

Besides the poor Russian economic condition could be another major contributor.Travel and Tourism Association of Goa (TTAG) president Savio Messias said that Goa has always been a favourite with Russian tourists. “Along with lack of awareness, I think their economic condition is also responsible for this,” he said.