The Terror-tainted town means big for UP poll struggle

The eastern Uttar Pradesh town of Azamgarh has always been a political flashpoint of sorts.

AZAMGARH:  The eastern Uttar Pradesh town of Azamgarh has always been a political flashpoint of sorts. Being a terror tainted Muslim-dominated district, major political players have always tread softly on the appeasement carpet. Such is the importance of the town that former chief minister and ex-Samajwadi party chief Mulayam Singh Yadav after winning Lok Sabha polls from Azamgarh and Mainpuri, decided to vacate the Mainpuri seat and retain Azamgrah.

Congress Vice-president Rahul Gandhi also organised meetings  to tilt the Muslim vote bank in his party’s favour. BSP chief Mayawati has over the years focused her campaigns on Muslim-dominated areas including Azamgarh. Local Muslim leaders also tried to reach the people through political empowerment by contesting elections. They have formed several smaller parties such as Ulema Council among others. 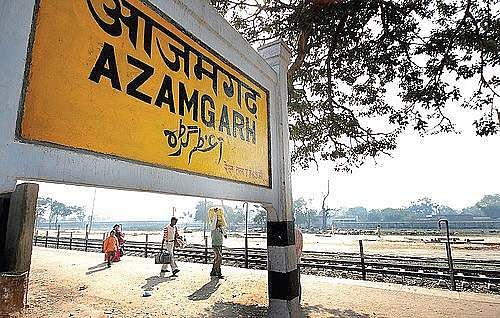 Even after being a politically ripe area, the town still struggles to wipe off its forbidden terror taint. The origins of underworld gangster Abu Salem and the 2008 Batla House encounter in Delhi—in which young men from Azamgarh were killed—were both unwelcome associations as far as the elders of the town are concerned.

The town is back in the news again for all the wrong reasons. This time around it is for Azamgarh native Asadullah Akhtar’s conviction for his alleged role in the Dilsukhnagar blasts in Hyderabad in 2013. The death sentence awarded to the son of popular doctor Javed Akhtar has once again stirred up a debate about whether the town is indeed a nursery for terrorism.

After the Batla House encounter put Azamgarh on the terror map of India, community elders floated an organisation called the National Ulema Council and roped in Dr Akhtar to contest the Lok Sabha polls in an initiative to rid the town of the taint. The Ulema Council’s founder president Maulana Aamir Rashadi Madni says successive governments have labelled youth from the district as terrorists only to keep the Muslim community under check. The terror tag is working to the disadvantage of the youth of the area, locals say. “In fact, people from Azamgarh have left to other cities to escape this taint. There have been instances when some youths faced difficulties in getting jobs when they said they belong to Azamgarh,’’ says a local Muslim leader.

It’s a dusty town of many madrasas and mosques, some of historical significance. The greater district around the town has a population of 4.6 million, about 20 per cent Muslim. Locals say that some localities like Saraimeer and Sanjarpur have become no-go areas to outsiders.