Will ‘Vikas’ give wings to Himachal Pradesh tourism?

Tourism is a Rs 5,000 crore industry in HP, but  poor connectivity is yet to catch the attention of political leaders

SHIMLA: Vikas is the battle cry of both BJP and Congress in Himachal Pradesh which goes to the polls on Nov. 9. Each party claims that development was at its peak when it was in power in the hill state.

To each his own, but the tourism industry, the mainstay economic activity of the state, accounting for Rs 5000 crore revenue per annum, has suffered a huge blow over the years. As the industry generates direct livelihoods for thousands of people, it is a big issue in this election.

To begin with, lack of proper air connectivity has dealt a major blow to the industry. The hill state has three airports -- Jubbar Hatti in Shimla, Bhuntar in Kullu and Gaggal in Kangra district. Among the three, it is only the airport in Kangra which has daily connectivity to Delhi if only by way of smaller ATR-72s. In Shimla, there are no regular flights for days at a stretch. “All three airports do not have adequate flights. The demand for tourism in Himachal is growing tremendously but lack of flights has become a major problem,’’ says Pradeep Sharma, a travel agent.

]He says tourists are flocking to Jammu & Kashmir or Uttarakhand which have better connectivity. “Travelling for long distances in a car can be tiring, people fall sick before they reach their destination. How many people would like to drive up from Delhi to Manali?’’ he wonders.

A tourism official told Express that though chief minister Virbhadra Singh did take up the matter of flight connectivity with union aviation minister Ashok Gajapathi Raju but nothing moved.

]Behind the connectivity probem lies the infra problem. There is no night landing facility, runways are smaller and airports cannot cater to larges numbers of people. There are no restaurants at Gaggal, the only airport which provides daily connectivity to Delhi. Air India and Spice Jet operate only three regular flights to Gaggal. Frequently, flights are cancelled due to bad weather.

]This needs political will to change the situation. But then, most of the leaders who are coming for election campaigning here are arriving on chartered flights. Mostly chartered flights touch down at the Jubbar Hatti airport.

“High cost of airfare and lack of adequate facilities is making operators apprehensive of operating here. Only a few operators have aircraft suitable for smaller airstrips. Not many tourists will shell out huge money for airfare,” an employee working in a leading airline, said.

Even rail connectivity is very poor. “We have a toy train from Kalka to Shimla which takes its own sweet time. If one has to reach Dharamshala by train, he has to alight at Pathankot, some 90 km away, and drive to Dharamshala. There is no rail line except between Kalka and Delhi. If there is a problem with air connectivity, the government can at least improve rail connectivity and introduce more special trains between Kalka and Delhi and Pathankot and Delhi. 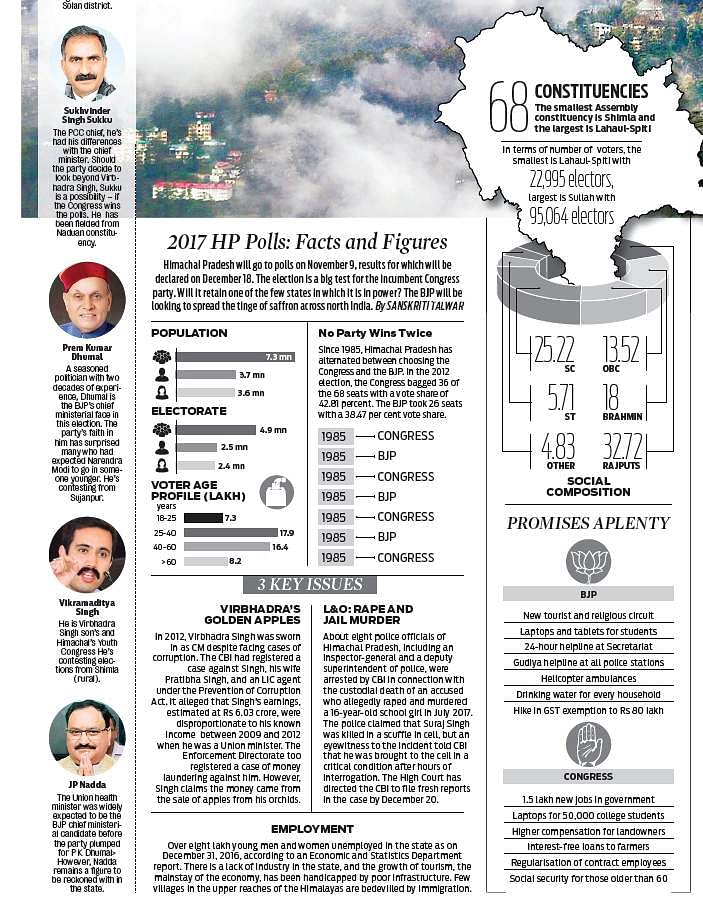 “Due to poor air and rail connectivity, many tourists do not want to come here. I receive so many complaints and tourists say that they would prefer J & K or Uttarakhand,’’ says another travel agent Jugal Kishore, who is based in Dharamshala.

Running a travel agency for two decades now, with help of his family, Jugal Kishore says that actually, Himachal tourism got a boost due to militancy in Kashmir. ‘’In 1980s and 90s, due to militancy, a majority of tourists began visiting Himachal. But over the years, due to connectivity issues, people opt for other destinations,’’ he says adding nature has bestowed HP with unique beauty and splendour and if the government does not do enough, Himachal will suffer.