A Slew of protests across Kerala has given a big jolt to the State’s attempt to emerge as an ‘investment-friendly’ destination, leaving in shatters its plan to rank high in the ‘ease of doing business

KOCHI:  A Slew of protests across Kerala has given a big jolt to the State’s attempt to emerge as an ‘investment-friendly’ destination, leaving in shatters its plan to rank high in the ‘ease of doing business’ criterion.

With protests against Vizhinjam Port construction at Thiruvananthapuram, IOC LPG Terminal at Puthuvype, lorry drivers’ strike at International Container Transshipment Terminal at Vallarpadam, IOC tanker lorry strike in Kochi and the ongoing campaign against GAIL pipeline in Kozhikode, the State has been on the boil for last several days, giving credence to its image as an investor-unfriendly destination.

Incidentally, a survey conducted by Niti Aayog saw the State’s ranking for ‘ease of doing business’ falling from a low 15 in 2015 to 20 in 2016 and further to 27 in 2017, making it one of the worst states to do business with.

“We’ve developed a disruptive culture over the years—of creating all sorts of trouble for those setting up big projects in the state,” said Joseph K V, economist and former member of Kerala Public Expenditure Committee. “Only a change in attitude, both psychological and sociological, can help the state change its image, which may take several years. 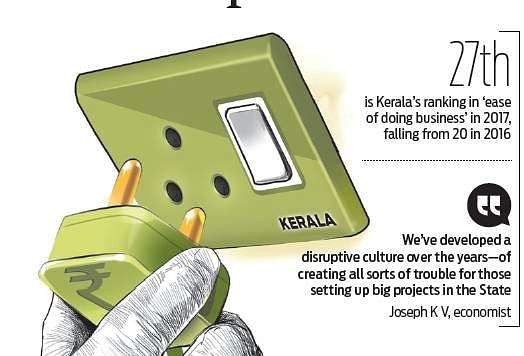 Triggering protests while in opposition for temporary political gains has become the order of the day, he said.V K Vijayakumar, chief investment strategist, Geojit Financial Services, an equity broking firm, said all the political parties were equally responsible for the current state of affairs.

“Both the Congress and the CPM are playing irresponsible politics. It’s sad to see the Congress falling into the strategy of the SDPI, which has a vested long-term game plan,” he said, adding that the CPM started the ‘nokkukooli’ culture in Kerala and that it cannot wash its hands off it.

Big hopes are pinned on the three projects that are at the centre of protests—the IOC’s LPG Terminal and Kochi-Salem pipeline (`2,200 crore), GAIL pipeline from Kochi to Mangaluru (`3,263 crore) and Vizhinjam Port (`7,524 crore). “Any other state would’ve grabbed these investments with both hands. We’ve made some big investments already, otherwise we would’ve gone,” said IOC deputy general manager (LPG) C N Rajendrakumar.