Nothing to high-five about

On 26 Nov 2012 India Against Corruption, ventured into politics under the leadership of an Indian Revenue Services officer, Arvind Kejriwal.

NEW DELHI: November 26 marks an important event in the recent political history of India. It was on this day in 2012 that an apolitical crusade against graft, called India Against Corruption, ventured into politics under the leadership of an Indian Revenue Services officer, Arvind Kejriwal, and thus the Aam Aadmi Party (AAP) was born.

Five years down the line, AAP, which had breathed fresh hope into the citizens of the country and rode high on the promise of clean politics, seems to have become a stereotypical political party. Like other such parties, AAP has seen infighting, scandals and corruption. The infighting came to light with Kumar Vishwas and Kapil Mishra making allegations of corruption against Kejriwal, who is the party’s national convener and also Delhi chief minister. Scandal hit the party after a sleaze CD allegedly involving a minister, Sandeep Mishra, surfaced. The party was in hot soup after then Delhi law minister Somnath Bharti’s midnight raid at Khirki extension targeting a group of African women.

“We should distinguish between the idea of AAP and the current reality of it. The idea was nothing less than revolutionary. It continues to be a source of inspiration and reminds us that citizens can shape democratic politics and they are rights-bearing citizens. The reality of the party, however, reminds us how difficult it is to realize this promise and how easy it is to slip to the path taken by conventional politics,” said Yogendra Yadav, Swaraj Abhiyan leader and former AAP member.

However, things have not always been bad for the party. The biggest political high the party achieved was its decimation of opponents in the 2015 Delhi assembly polls. The AAP government’s mohalla clinic scheme and its good work in the education sector have been appreciated by the people of Delhi. Also, its recent announcement of a scheme to enable free pilgrimage by senior citizens and the youth is bound to make many in the national capital happy.

“Some of the highs of the party in its five years of existence include winning 67 of the 70 seats in the Delhi elections, education reforms, mohalla clinics, regulating water and electricity fares, and implementing the first odd-even scheme,” party leader Ashutosh said, adding that its poor performance in the MCD polls, less than expected success in the Punjab Assembly elections, and the arrest of party MLAs due to the alleged vindictive politics of Narendra Modi were some of the lows the party had seen. “AAP is not a political party, it is a revolution,” Ashutosh tweeted with the hashtag 5yrsofAAP. 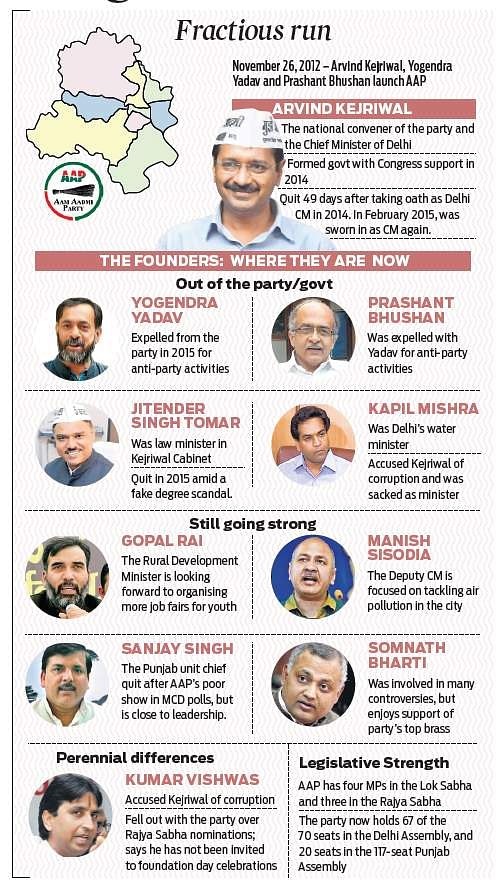