The presence of E.coli in water indicates the water has been contaminated with fecal material that may contain disease causing microorganisms.

NEW DELHI: As the national capital grapples with severe pollution, Delhi’s civic agencies might soon find themselves in a situation where they will have to choose the lesser evil, either sprinkle water treated at Sewage Treatment Plants (STPs), which a study claims contains harmful bacteria or not address the issue at all.

According to Kalpana Arora, a PhD holder in Waste Management from IIT Delhi, samples of treated water collected from the STP set up at two different points on the Kushak Nallah in New Delhi area (NDMC) contained E.Coli microbes. 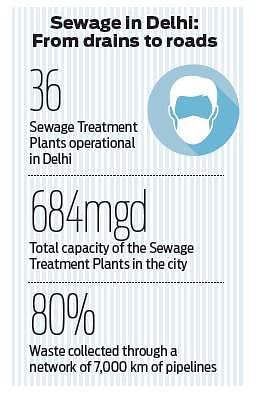 The presence of E.coli in water indicates the water has been contaminated with fecal material that may contain disease causing microorganisms, such as certain bacteria, viruses, or parasites.
Arora detected the presence of the harmful bacteria strains while working on a private study which will soon be submitted to the Central Pollution Control Board.

“Though the reports were of last year September the situation remains unchanged. The presence of bacteria could be due to many reasons like lack of maintenance of the plant by a skilled labour,” says Arora, who works as an water treatment advisor for many agencies.  “Also, the acid or the cleaning material which is generally available in the market if used in the STP destroys the healthy microbe which in turn helps the bad bacteria to thrive in the treated water, which is later on used for purpose of beautification and spraying over trees on the road side to remove dust,” she adds.  Arora has been working working on the research since last year.

Delhi has around 36 STPs at different locations with a total capacity to generate 684 million gallons of water per day. The city generates around 680mgd of sewage, which is 80 per cent of the total sewage collected through a network of 7,000 km of pipelines laid down.

After the National Green Tribunal (NGT) order in last November to define highly polluted spots and start sprinkling water to control the dust, the Municipal Corporation of Delhi (MCD) and  the Delhi government has from time to time sprinkled water at ITO area and Anand Vihar ISBT, identified as one of the highly polluted areas in Delhi.

“The water that we use for spraying on plants is raw water. The raw water is not fit for drinking but it is used for spraying purpose. There could be a few issues with the water but we have not come across any such study yet,” said an official who looks after East and North MCD Horticulture Department.