With the Gadchiroli encounter that killed 39 Maoists being touted as the most successful anti-Naxalite operation in 40 years and an MHA report saying the Red corridor is shrinking, Pushkar Banakar, Ab

With the Gadchiroli encounter that killed 39 Maoists being touted as the most successful anti-Naxalite operation in 40 years and an MHA report saying the Red corridor is shrinking, Pushkar Banakar, Abhijit Mulye and Ejaz Kaiser check out if the tall claims hold water

Last Sunday, at least 39 Maoists were killed in a bloody encounter with security forces on the north bank of river Indravati that divides Maharashtra and Chhattisgarh. Reports say the Maoists were trapped by C-60 commandos in a pincer move from the north, with a hillock acting as a shield, and that they had no option but to jump into the river even as they returned fire.

After the April 22 encounter ended in heavy rain, the bodies of 16 Maoists were recovered from the spot. A day later, 15 bodies were spotted floating downstream. On Wednesday, two more were found floating in the river. At last count, the toll stood at 39.

With this being touted as the biggest success ever in the last four decades by any anti-Naxalite force and the Ministry of Home Affairs releasing findings of a recent survey of Left Wing Extremism-affected districts, the big talking point has been the alleged “shrinking of the Maoist influence” in the country. While the survey has listed the 30 most-affected LWE districts, it has also mentioned several that have been struck off the list and a few that have been added. 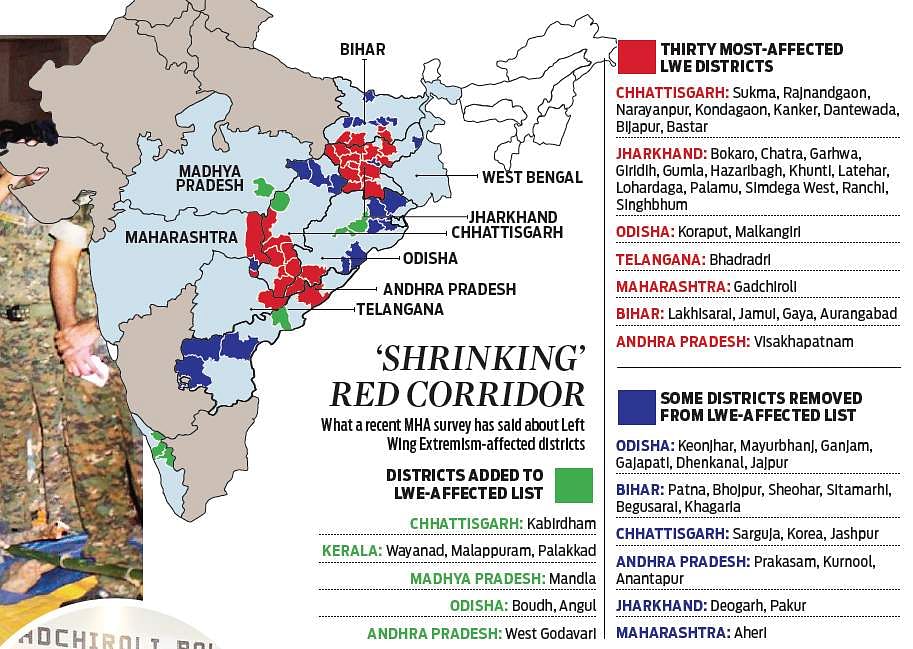 The most-affected state continues to be Chhattisgarh, where at least eight districts -- Sukma, Rajnandgaon, Narayanpur, Kondagaon, Kanker, Dantewada, Bijapur, Bastar – are reported to be in the grip of the Moaists. Jharkhand is not far behind, with at least 13 districts on the list. Other affected states are Andhra Pradesh, Telangana, Maharashtra, Bihar and Odisha.But the spotlight is on the many districts that have been struck off the list -- at least six in Odisha, six in Bihar, three in Chhattisgarh, three in Andhra Pradesh, two in Jharkhand and one in Maharashtra. So, is the Maoist monster really losing its teeth?

Experts are not so sure. Nandini Sundar, Professor of Sociology at the Delhi School of Economics, told The Sunday Standard: “In the first place, not many districts were affected by Left Wing Extremism. It was the only the government that declared them affected, so they increased the numbers. Then later, to boost their own image, declared them LWE-free.”

Referring to reports on the “declining hold” of the Maoists in remote villages, she said there was no concrete evidence yet to categorically say this. “If people are assuming that remote villages are not under the influence of Maoists as government schemes are reaching them, I do not know. I do not think the schemes are reaching them but I cannot comment on this for sure.”

Tarun Mene, Assistant Professor of Tribal Studies at the Rajiv Gandhi University, was of the opinion that the Maoist problem would remain as long as the tribals were not given their due.“I can be pretty sure that there has been no disconnect between tribals and Maoists. The tribals see the Naxals as their only hope to defend their civil rights. The report which says that incidents of LWE have come down is because Maoists are regrouping now after the government came all out against them,” he said.

Mene said the government should try and find a real political solution to the Maoist problem. “Only saying LWE has declined in reports does not change the ground situation. You will see a rise in such incidents after the Maoists manage to regroup,” he said.

Questions are also being raised on the authenticity of the Gadchiroli encounter. According to Anand Teltumbde of the Committee for Protecting Democratic Rights, based on prima facie information, there was ample scope to suspect that no encounter took place in Gadchiroli. “It was cold-blooded killing. Else, how come not even a single police personnel was even wounded?” The People’s Union for Democratic Rights, too, raised similar issues.

Abhinav Deshmukh, Superintendent of Police of Gadchiroli district, brushed aside such claims as Maoist propaganda. “Our men are highly trained personnel deployed for the security of the people and the law. We have well-documented sets of standard operating procedures for all our conducts and the troops are trained to act accordingly,” he said.

Retired IPS officer Shirish Inamdar, who is engaged in training of intelligence officials, wondered why no such questions were raised when security personnel were killed by Maoists. “This is the standard operating procedure of countless front organisations of Naxals. To create an atmosphere of suspicion and mobilise opinion against state machinery is what they want to achieve and for that they exploit every possible way,” he said. WHO ARE THE C-60 COMMANDOS?

The C-60, also known as Crack Commandos, is a group of 60 police personnel handpicked for training into an elite counter-Naxalite force in Maharashtra’s Gadchiroli district. It was first formed in 1992 by then Superintendent of Police K P Raghuvanshi, who later rose to head the Maharashtra ATS. The C-60 commandos are specially trained in guerrilla and jungle warfare with special focus on anti-Naxalite operations. They are trained to withstand extreme weather conditions, operate on tough terrain and handle sophisticated weapons and equipment. They also reach out to people in remote villages, build a rapport and cajole them to lay down arms.

In a 21-page booklet issued by the Maoist central military commission, cadres have been exhorted to plot and execute a tactical shift to counter ‘Samadhan’, the current phase of the government’s anti-Maoist operations. The cadres have been asked to train more intensively and strengthen their intelligence network. In a statement, the Maoist leadership said: “Following the Burkapal ambush in Sukma, the new enforced strategy Samadhan has set the target to eliminate the revolutionary movement by 2022. We need to remain focused on defeating the strategy.” The term, Samadhan, was coined by Union Home Minister Rajnath Singh in 2017.

Stay up to date on all the latest The Sunday Standard news with The New Indian Express App. Download now
TAGS
Maoists Gadchiroli encounter Naxalite