Have a heart, India: With few donors, organ transplants at an abysmal 1 per cent

Fifty-three years after the first organ transplant was carried out in India in a Mumbai hospital, at least 12 states are yet to clock their first transplant surgeries, reflecting the dismal evolution

NEW DELHI: Fifty-three years after the first organ transplant was carried out in India in a Mumbai hospital, at least 12 states are yet to clock their first transplant surgeries, reflecting the dismal evolution of organ donation in the country.

Figures by the Union
Health and Welfare Ministry show that less than 1 per cent patients in need of heart, liver and kidney transplants got the organs last year. Data also show that not a single transplant has ever happened in several states including Bihar, Jharkhand, Uttarakhand, Himachal Pradesh, Jammu and Kahsmir and the Northeastern states.

“While southern states and Maharashtra—especially Chennai—have emerged as organ transplant hubs in the country over last few years, the scene is extremely disappointing in northern states and in some states, it’s yet to take off,” Vimal Bhandari, director of the National Organ and Tissue Transplant Organisation (NOTTO) told The Sunday Standard. 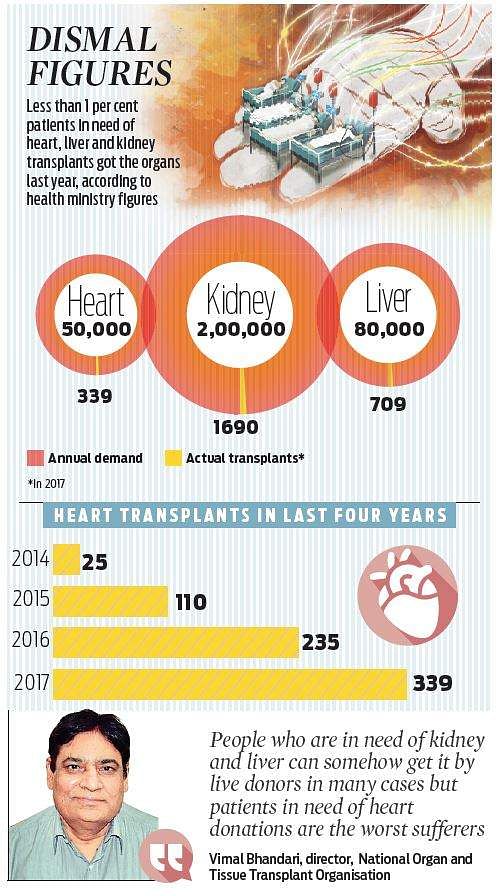 Experts say there are two ways for organs to become available for transplant. One is cadaveric in which within hours of the donor’s death, the organs are taken out, “harvested”, and transported to the recipient.

Another way is living organ donation in which a volunteer —usually a family member of the patient — donates an organ or a portion of it for transplant. In developed countries like the United States, most of the organ transplant is cadaveric.

“However, in India most organ transplants happen through the live donations—and we won’t really be able to fulfil the huge demands unless we go big on cadaveric donations,” said a cardiologist at AIIMS, Delhi.

Bhandari, too, pointed out that while 1.5 lakh people die in road accidents every year and another 1 lakh people who end up as brain dead can be can be organ donors,  the rate of organ donation is just 0.86 per million in India so far.

“As a result, people who are in need of kidney and liver can somehow get it by live donors in many cases but patients in need of heart donations are the worst sufferers,” the NOTTO chief said.

Also, organ transplant in India has largely remained a private sector activity. Neither major government tertiary care centres nor medical colleges have given it the due attention.

“This is the reason it has got attached with bad medical practices and controversies. Public sector hospitals like AIIMS in Delhi and other cities should make it their priority,” said B P Rana, a kidney transplant expert in Delhi.

Recently, NOTTO had raised an alarm that some corporate hospital in Chennai preferred patients from abroad over Indians in case of cadaveric transplants, despite it being against the rules.  “All this would not happen if there were sufficient cadaveric donations happening,” Bhandari remarked.

Now we are on Telegram too. Follow us for updates
TAGS
organ donation transplant surgeries