Centre warming up to reconciliation in Jammu and Kashmir

Kashmiri experts differ on outcome of dialogue but all agree that Delhi’s tough stance proved counterproductive.

SRINAGAR: After its tough policy towards Kashmir and Pakistan for four years, the Modi government now appears to be slowly veering from the path of confrontation to that of reconciliation. It has begun the process to tackle the Kashmir crisis on two fronts, internal and external.

On May 16, Union Home Minister Rajnath Singh announced unilateral Ramzan ceasefire in J&K. Although militants did not respond to the ceasefire, the public heaved a sigh of relief. Since Ramzan began, there has been no civilian deaths in the state.

Singh announced that the government was ready for dialogue with Pakistan and Kashmiri separatists. Unlike in the past, the separatists did not reject the offer but asked the Centre to clear ambiguity regarding talks.

On May 27, the Centre took a major leap towards the path of reconciliation with Islamabad after the DGMOs of India and Pakistan agreed to fully implement the 2003 border ceasefire pact to stop cross-border firing.

Terming these confidence building measures as a positive development, political analyst, Rekha Choudhary said till now the Modi government was seeing Kashmir as a law-and-order and security issue.

“It used to see Kashmir as an issue that needed to be handled sternly and cracked down on stone pelters and separatists.” But a shift in policy is visible and the process of reconciliation is coming slowly, but surely, Choudhary said. “It may not come with the bang, but it is coming in stages. Whenever hardening of position takes place, the end point is dialogue and same is happening now.”

As far as Pakistan was concerned, “the might has been shown by the government and now is the time to talk.”

However, academician and political analyst Sidiq Wahid is not optimistic. “It is difficult to imagine that ‘confidence’ can be restored by announcement of a ceasefire. Are we supposed to jump in joy because Delhi has ordered or will order armed forces to stop wounding, maiming and killing civilians?”
On the Home Minister’s dialogue offer, he said, “I’m sceptical because these ‘dialogues’ are founded on a basic assumption of inequality. As to the usefulness of the dialogue, it can be gauged if what is discussed is shared with us, either in part or in totality. Transparency for both parties should be the byword this time around.”

Journalist Gowhar Geelani said from a government report, it was clear that Delhi’s muscular policy on Kashmir proven counter-productive. He said on the external front, back-channel diplomacy, Track-II and also international pressure must be the factors responsible for peace overtures and pledges to uphold the border ceasefire. However, BJP state general secretary Ashok Koul said his party was always in favour of dialogue. He advised separatists not to attach any condition and go for dialogue with an open mind. 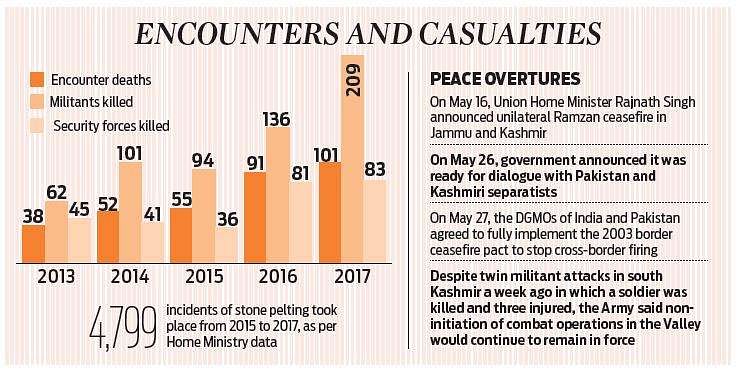 Now we are on Telegram too. Follow us for updates
TAGS
Kashmir Pakistan Modi