Dam it: Gujarat learns a lesson on water resources

GANDHINAGAR: Deficient rainfall in the catchment of river Narmada in Madhya Pradesh has taught Gujarat a bitter lesson on doing away with complete dependence on big dams and the need to rejuvenate local water resources.

Facing acute water shortage, Gujarat government for the first time launched a comprehensive exercise to revive its 32 monsoon rivers, deepening of 13,000 lakes, check dams and reservoirs that were otherwise partially blocked with silt and waste. Some parts of the states faced massive floods in monsoon last year and many were killed.

Shortage of water across the state forced Chief Minister Vijay Rupani to stop supply of water for irrigation from the Sadar Sarovar Dam, the major source of water to state. According to the government officials, the water supply from Narmada to the state this year has been cut by 50 per cent, thus leaving the water only to meet drinking water demands of people in Gujarat.

Realising that dependence of dams won’t suffice to meet demands of water for both agriculture and drinking, the state government launched a month long massive exercise ‘Sujalam Sufalam Jal Abhiyan’ from May 1-31 across 33 districts with the involvement of locals, NGOs
and corporates.

“The water conservation campaign across the state has created 11,000-lakh cubic feet of additional water storage capacity. We will have to wait till early next year to see the results of all our efforts. Our efforts will be successful, if there is rain water storage in the cleaned water tanks and reservoirs till summer season,” said Rupani.

The state government has already announced that the initiative will continue till 2020 to enhance water storage capacity in the state. As per Narmada Water Dispute Tribunal Award in 1979, states of Madhya Pradesh, Maharashtra, Gujarat and Rajasthan get the share of total water stored in all major and medium dams built across river Narmada.

Pointing that the state received 50 per cent less water from Narmada in 2017-18, Mona K Khandar, Commissioner and Secretary, Rural Development said: “This year taught us that these tall dams alone are not sufficient to meet water demand and we need to rejuvenate local water sources for water security.”
Keeping up with increasing demand of water in the state, more than 26,700 km of canals have been constructed in Sardar Sarovar Project in last three years.  The main objective of the project is to provide drinking water to an estimated 40 million people and irrigation in 1.8 million hectare of 17 districts of Gujarat.

“People came out in large numbers and supported the campaign. The majority of funding for the drive came from various NGOs, corporate sector and it created a mass awareness for water conservation which has never happened in the before. This will also help in recharging water table which has gone down over the years due to increased demand,” said Rupani, who sounded very upbeat about the mass participation of the local in the month long campaign across the state.

People, especially farmers, bearing the brunt of water storage are hopeful that the whole exercise this year will ensure a better water availability in the state this year and next year.
“There is a shortage of water and we get drinking water supply on alternate days at our home. I hope the situation will be better in coming months,” said a local villager. 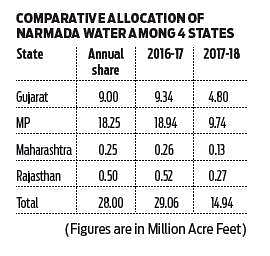 Now we are on Telegram too. Follow us for updates
TAGS
rainfall Narmada Gujarat