NEW DELHI: Indian judiciary, which is reeling under huge pendency of cases, has got a reason to heave a sigh of relief — six Delhi district courts, in the last 10 months, have disposed of a remarkable number of cases that had been pending for years.

According to the data, of the 11 districts of the National Capital, the central district has done exceptionally well. It has managed to dispose of over 3,000 cases out of the 10,471 that had been pending for the past five years.

“In order to fight pendency, we have given two targets to lower judiciary — to segregate cases pending for 10 years and five years respectively, and then fix the target dates for disposal of each case. We are satisfied with the positive outcome,” said a judicial officer associated with the Disposal Committee.

The officer said ever since the Acting Chief Justice of Delhi High Court, Justice Gita Mittal, assumed office, changes were brought about to improve the working of lower courts — from abolition of traffic courts to transfer of judicial officers.

Judges were given freedom to assign the targeted cases to any civil and criminal court with directions to clear them in a time-bound manner. In civil cases, court-appointed local commissioners were given the task of recording of evidences, in order to save judges’ time. Special focus was given on setting shorter dates, so that cases that had been pending for 10 years can be disposed of.

“My case has been pending since 2007, but there was no progress till mid-2017. But, after July last year, my case got priority hearing and is now on the final stage,” said Pramod Bansal, who is fighting a matrimonial case for his daughter in Delhi’s Tis Hazari Court. 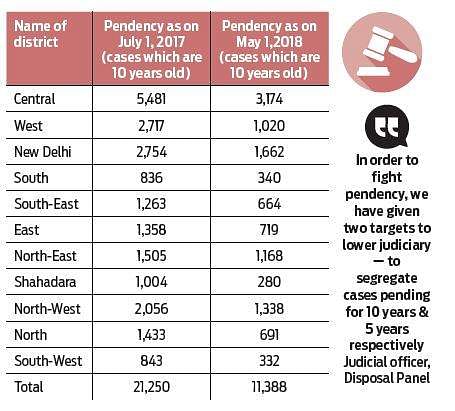 Now we are on Telegram too. Follow us for updates
TAGS
Delhi district courts