Not a single region in Delhi has recorded a significant rise in groundwater level during last two decades.

NEW DELHI: Water crisis is real. While its demand has zoomed upwards in Delhi, water level has also sunk to a record low. Such is the National Capital’s huge demand of water that, according to a Central Ground Water Board (CGWB) report, not a single region in Delhi has recorded a significant rise in groundwater level during last two decades. The culprit: excessive and mindless exploitation.

According to the report accessed by The Sunday Standard, “extremely sad state of affairs” is evident in these regions.

In south district’s Gadaipur, considered as one of the posh localities in the city, groundwater level has declined alarmingly by 33 m from 2005 to 2017. Ideally, it should remain between 0-5 m below ground level (bgl). At Gadaipur, in the assessment conducted by the Board in May 2005, water level was found already beyond 40m bgl. It fell further to 78m bgl in May 2017.

Groundwater level was last recorded at 63m bgl in Saket in May 2010, according to the report. A fall of nearly 10 m was also noted in east district’s Gazipur area in last seven years. On the flip side, data recorded at Akshardham show groundwater level varying a little below and above 6 m bgl from May 2005 to May 2016.

“The shallowest water-level noted at Akshardham is mainly because it lies in active floodplain region. However, areas in the east, including Mayur Vihar, now come under inactive floodplain region. The embankments have stopped flood water from reaching to the other side through the surface. On one hand, the recharge of groundwater level has reduced in parts of east Delhi and on the other, pumping has increased,” says retired Indian Forest Service officer–turned-environmentalist Manoj Mishra.

The Board found there were some pockets where the change in water level was not significant or remain unchanged. For instance, in North Delhi’s Rohini, groundwater level dropped by less than a metre in five years. However, it was recorded in the year 2010.  Worse, such pockets are diminishing over the years as per the report.

The SC had asked the secretary of the Ministry of Water Resources, the Delhi Government and the Delhi Pollution Control Committee to inform it about the "possible solutions" to the situation. However, Mishra says the report “has its weakness with gaps in data.”

“The report lags a detailed analysis to help either the court or the executive to take a specific action plan,” he adds. 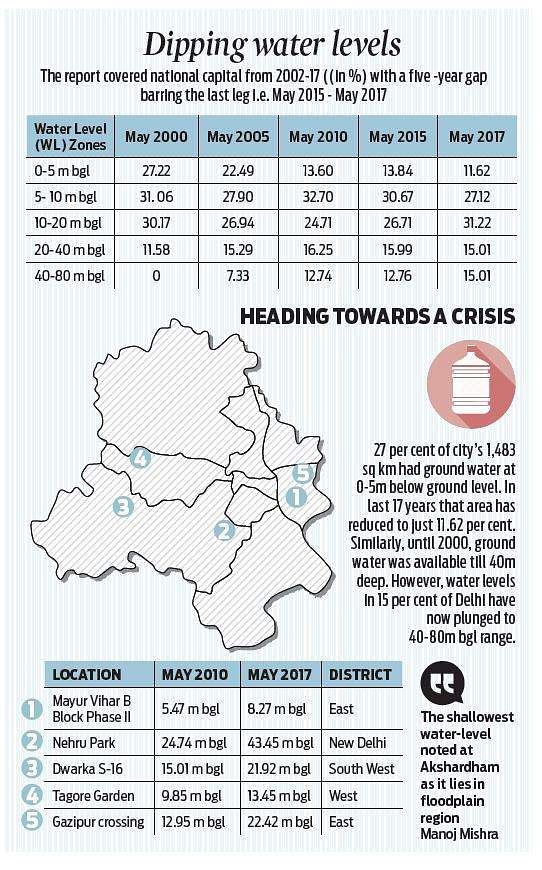 Now we are on Telegram too. Follow us for updates
TAGS
Water crisis water scarcity Delhi