As the world observes its first World Bicycle Day on June 3, Siddhanta Mishra explores why cycling as a mode of travel has not picked up in India, challenges in the way of popularising it, and what ti

As the world observes its first World Bicycle Day on June 3, Siddhanta Mishra explores why cycling as a mode of travel has not picked up in India, challenges in the way of popularising it, and what tips can be taken from The Netherlands to promote it

story goes that sometime in May 2012, a month before Justice Dalveer Bhandari was to leave for The Hague to take up his first assignment at The International Court of Justice, he got a call. The voice on the other side of the line sprung at the Justice what seemed a very curious question: whether he would like a bicycle booked for him to travel to work at the ICJ.

Used to travelling in limousines with pilot cars leading the way, the Justice was apparently dumbfounded. What he told the caller is not known but he is reported to have been stunned to learn that in The Netherlands more than half the people, including VIPs, cycled to work. 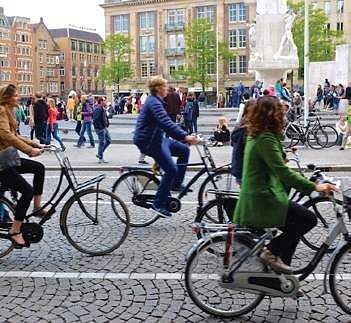 Cut to June 3, 2018 – World Bicycle Day. One wonders how many in India know June 3 has been approved by the UN as the official day of awareness about the multiple societal benefits of using the bicycle for transport and leisure. Or whether cycling is being promoted in a consistent and coordinated manner at all.

The challenges are many. To start with, the infrastructure is missing. Even for cycling enthusiasts, say in the Delhi-National Capital Region, wending their way through the ever-growing maze of cars, trucks and buses is very tough because there are no dedicated cycle paths, signages or separate traffic lights.
Compare this to Amsterdam in The Netherlands, where 70 per cent of travelling is done on bicycles. This is enabled by excellent cycling infrastructure such as clearly marked cycle paths and tracks, protected intersections, ample bicycle parking and cycling routes that are shorter, quicker and more direct than car routes. The cycle tracks have smooth surfaces, separate signs and lights, and are wide enough to allow side-by-side cycling and overtaking.

Apart from bicycle-friendly infrastructure, The Netherlands also boasts of bicycle-friendly public policy, planning and laws. Urban areas are frequently organized as “living streets”, which prioritise cyclists and pedestrians over motorized traffic. Towns have been designed with limited access to cars and limited car parking, making car use unattractive.

In Delhi by contrast, even Lutyens’ Delhi that is being developed as a smart city, there are no dedicated cycle lanes. But cycling enthusiasts prefer biking there because the roads are wide and the traffic relatively more disciplined than in other areas. 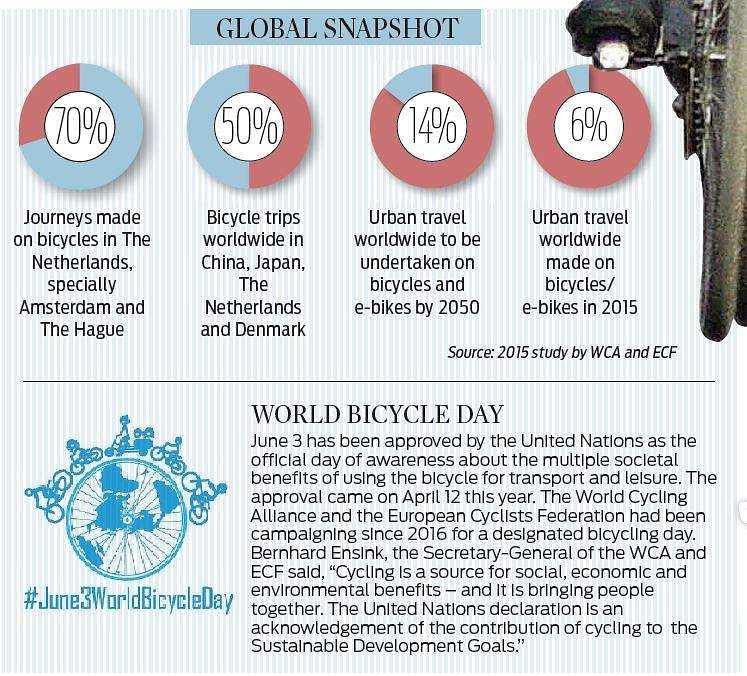 In The Netherlands, where 36 per cent people have listed the bicycle as their most frequent mode of transport, racing and sports bicycles are many but the most common variety are the utility bicycles, fitted with baskets, panniers and load-carrying trailers to carry schoolbags, office briefcases or shopping baskets. Its cool climate means that one can easily cycle short distances without breaking into a sweat or requiring a shower straight afterwards.

All this is hard to imagine in India, with its hot and humid climate and over 1.25 billion people.
However, Delhi appears to have made a start in its own small way. Eighteen Metro stations across Delhi provide bicycles on rent but the initiative is hobbled by a lack of cycle stands to drop them off after use. The major player in the sector is the Greenolution company, which supplies cycles to eight locations. It has tied up with Delhi Metro Rail Corporation, IIT Delhi and Jawaharlal Nehru University to provide bicycles.

“There has been a significant growth in the sector in the last five years,” said A John, the Head of Operations at Greenolution. “But the multiplicity of authorities means that proposals companies like us make just gather dust at government offices. The Delhi government and municipal bodies just keep fighting among themselves over jurisdiction issues. The officials almost fail to understand the benefits of bicycling, besides looking at their revenue interests.”

John’s observation is not far from the truth. In 2015, the South Delhi Municipal Corporation had planned to start a pilot project to provide bicycles to people at residential complexes and markets in its zone to ease parking problems. But it has not taken off even after three years.

“The model was that bicycles would be provided at a few bus stops, various markets and residential complexes as a green option,” said an MCD official who has all but forgotten the project.
Again, there is a tussle going on over setting up a bicycle station at the Bus Rapid Transit corridor, the issue being who would advertise there and what would become of the revenue generated. As of now, the focus is on the advertising rather than the cycling.

Also, the initiative that former Uttar Pradesh Chief Minister Akhilesh Yadav had taken to demarcate dedicated cycle tracks in Ghaziabad and Nodia has gone to seed. They are now being used to dump waste and construction material.

A little push to promote cycling has, however, come from universities. “The new trend is that more and more campuses are coming forward and embracing cycling as a mode of transport rather than civic bodies, for whom the idea has taken a backseat,” said John.

Jitendra Jassel, a cycling enthusiast, summed up the cycling scenario succinctly: “Motorbike and car drivers of Delhi do not respect cyclists. One has to be very careful while riding, and wear safety gear. High-end bicycles cannot be parked like motorbikes because they have parts that can be easily taken off and stolen.”

He said there had been a significant rise in the number of cycling groups in Delhi over the past five-six years. There could be some 30 groups with 50-100 members each in Delhi, he claimed.
“Cyclists mostly prefer their own bicycles to the ones provided at Metro stations or even by new start-up companies. Those cycles require maintenance, they are not in good shape,” he added.

The Netherlands: A cyclist’s haven

‘My cycle is now a part of my family’

Cycling may be a passion for some in Delhi, but there are others who don’t have any other mode of transportation. Meet 60-year-old Hari Ram, who cycles daily to work at Nirman Bhawan in Central Delhi.

“I live near Lodi Colony. I have been working at the Central Public Works Department for 30 years now and I cycle daily. I take the route which has wide roads but when I have to visit offices outside the NDMC area, the traffic is chaotic. But my cycle is now a part of my family. Both my kids grew up on this, I use to drop them to government school on this. They learnt cycling on this, my cycle is like an old friend to me,” Hari Ram said, with a smile.

Hari Ram, who works as a beldar with CPWD, said scores of his colleagues who work as gardeners at the CPWD also cycled to work daily.

“We face many problems. But the biggest is the lack of cycle stands where we can park them safely. Because there are few cyclists, there are no bicycle stands in any of the government offices in this area. There were a few earlier, but they were demolished to make space for parking motorised vehicles,” he said.

Bicycle start-ups ride into the ring

Of late, some WhatsApp groups have been encouraging people to cycle, and popularising the concept of ‘dockless bicycles’. Two companies that are reaping the benefits are Mobycy and Ofo, which allow hiring of bicycles that are fully driven by technology and do not require docking stations or bicycle stands.

Several people buy expensive bicycles but hesitate from riding them regularly as they do not have companions. For them, these WhatsApp groups come in handy. The concept is still not as popular in India as it is in the Western countries. But with the growing fitness craze, online literacy and concern for the environment, it is slowly catching on.

“In Delhi, people are very interested in cycling now. But the problem comes from multiple agencies that make multiple rules, which is different from cities like Bangalore. We believe in motivating people to use bicycles for short distances and eventually make bicycling the best and most environment-friendly mode of transport” Akash Gupta , CEO of Mobycy, told The Sunday Standard.

Apart from Delhi, the company has branches in Chandigarh, Kota, Faridabad and Bangalore. Between January and March this year, the company registered an average of 1,000 rides per month in Delhi.
Ofo, which launched its Delhi operations in January, has tied up with Delhi Technological University and supplied 150 cycles.

“With overcrowded roads and unprecedented pollution levels, Delhi is ripe for a cycling revolution. Ofo is providing the solution by making bicycles available and accessible for shared use. Bicycling comes naturally to Indians and we have witnessed tremendous growth,” Rajarshi Sahai Director of Public Policy & Communications, Ofo India, said.

Hiring a dockless bicycle
On the company’s mobile app, a user will have to scan the QR code or enter the plate number displayed on each bike. He will then receive a unique password to unlock the bike. On reaching his destination, he can park the bike in any authorized parking area nearby and lock the bike to end the ride.