NEW DELHI: Cost cutting, that dreaded phrase in corporate circles, has now hit India’s Grand Old Party. Starved of income after losing power in Delhi in 2014, and faced with a string of losses in State after State, the Congress has had cut costs drastically. Gone are the days when the party would splurge on meetings in exotic locales, running day-to-day affairs or even buying legislators to topple governments.

The successive decline in its income over the last four years has led to shrinking of budgets for meetings, celebrations, computer section, news watch, media department and other heads. Such is the cash crunch that jokes of the party even cutting down on chai-paani does the rounds of 24 Akbar Road.

It is another matter that the party has not had much to celebrate over the past few years, and that it spent a massive amount to mark the 125th year of its existence. The party’s computer section,  used daily by workers, has also seen less money spent on it. In 2016-17, the expenditure was Rs 26.58 lakh while it was Rs 39.13 lakh. the previous year,  The media department, one of the important sections of the party organisation, has also cut down costs from Rs 28.10 lakh to almost half at Rs 14.74 lakh.

Office expenditure too witnessed a similar decline, coming down from Rs 57.8 lakh in 2015-16 to Rs 50.97 lakh in 2016-17.  Congress sources admitted that the party had been forced to tighten its belt in the past few years but said they had only curtailed “unnecessary expenditure.”

“There is hardly any cutting down in the expenditure which is necessary, but there is nothing wrong if money can be saved from unwanted expenses,” a party leader said. According to the ADR, which studies the income and expenditure of the political parties in the country, the income of the Congress party has seen a major decline in the last few years and this was reflected in its expenditure. 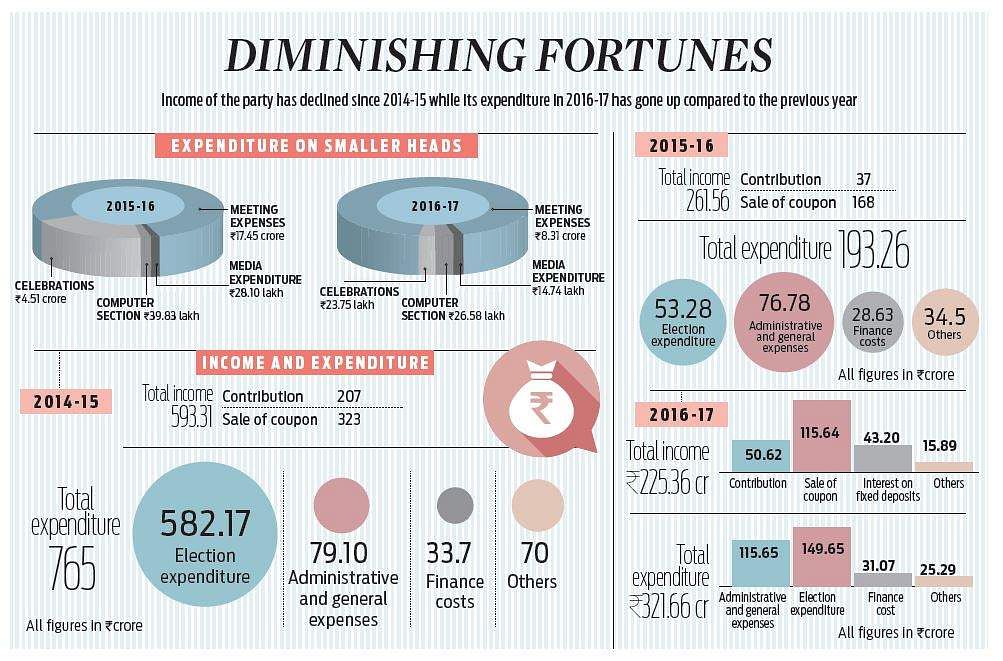 Now we are on Telegram too. Follow us for updates
TAGS
Congress INC Congress party income