Growing number of suicides by students has prompted a group of psychiatrists to propose a model for students’ wellbeing in educational institutes.

NEW DELHI: Growing number of suicides by students has prompted a group of psychiatrists to propose a model for students’ wellbeing in educational institutes. According to the Ministry of Home Affairs data presented in Parliament, over 26,000 school and University level students have committed suicides in India between 2014-2016 and the figures are on an upward swing.

To put it the other way, one student commits suicide in the country every hour. In 2014, 8,068 students ended lives while this number rose to 8,934 in 2015, marking a rise of over 10 per cent. In 2016, the total number of students who took the extreme step stood at 9,474 — about 6 per cent more than the previous year. About 7,500 of these students did so because of failure in exams, while the rest had other academic or non-academic issues. 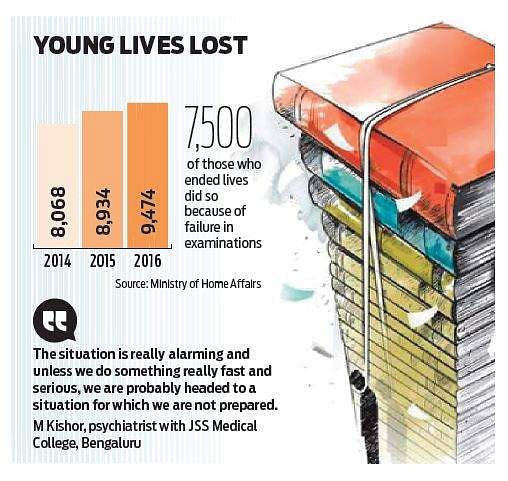 The worrying figures sent four mental health experts in Karnataka scrambling to devise a three-tier mechanism that can be emulated by schools and institutes of higher education. “The situation is really alarming and unless we do something really fast and serious, we are probably headed to a situation for which we are not prepared,” said M Kishor, a psychiatrist with J S S Medical College in Bengaluru, who is one of the four researchers behind the well-being model.

His fears seem justified as only last month, following the Class XII and X board results, at least 15 suicides were reported. The psychiatrists have proposed that all educational institutes should have a student-led and faculty supported well-being programme where trained students counsel their peers at least for two hours every week.

“In a ratio of 1:25, student volunteers are selected from every batch and they are trained by a senior teacher in association with psychiatrist from government hospitals or private hospitals and psychologists wherever available. Training of volunteer students is in “peer-to-peer” counseling (buddy system/friend for a friend).”

In the second level, trained faculties should spend time with students who are facing mental distress related to academic or non-academic issues and in third level students who have severe mental distress should be counselled by psychiatrists or clinical psychologists. The model has been published in the May issue of International Journal of Health and Allied Sciences.
“Some IITs have buddy system but in those cases there is not enough training imparted to students and that can result is burnout as not everyone can handle emotional issues on a regular basis,” Kishor stressed.

Abhay Tirke, a Pune-based child psychologist too pointed out that as there is an acute shortage of psychologists in the country, lack of awareness to seek counselling and not enough help available at school and university level for minors and young adults, the student suicide is rising.

“Sadly, parents instead of helping children, end up building more pressure for scoring well in examination and qualifying in competitive examination,” National Commission for Protection of Child Rights member (education) Priyank Kanoongo reckoned, that children should be taught that examinations do not determine the course of life and students should be trained in coping mechanism.

Now we are on Telegram too. Follow us for updates
TAGS
student suicide suicide rate